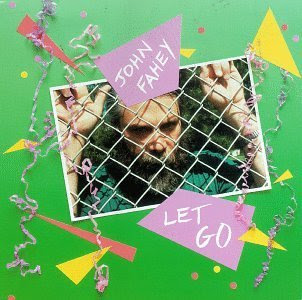 Fahey died, one assumes of a surfeit of the blues, in 2001. I only saw him play once, at some point in the mid-80s, when I lived around the corner from Folk City; he was a little drunk, I think, but very funny between songs. Frankly, I didn't think he was that hot musically, though; I remember thinking "That's what people have been raving about for all these years?" In retrospect, of course, I suspect he was just having an off night, at least if this "Layla" is any indication.

[h/t Steve Schwartz]
Posted by steve simels at 7:53 AM

I just think anybody who tries to cover that song is asking for trouble. And this guy is/was no exception: "Let's see - I think I can do this better than Clapton & Duane."

I figure the point of a cover is not necessarily to do the song better, just to do it differently. I have the original & I have Fahey's cover, and I enjoy them both. They satisfy different moods.

Funny, I just listened to that entire song yesterday when it came on the radio, for the first time in forever.

I find that I can now enjoy Stairway to Heaven as well...I hadn't listened to either song all the way through in probably 20 years. Guess I needed a breather.

Layla is verse-chorus three times, no bridge, straight to the coda. Kind of an odd structure.

Fahey compresses it a bit. It sounds like an exercise to me...enjoyable enough. No birdie tweet at the end, though. Slacker.

or maybe it wasn't an off-night, steve. i saw fahey on the west coast on night in the mid-80s and had the same reaction as you did in new york. it was perfectly fine, but not revelatory.

Really interesting treatment, sort of an endless set of Carcassi studies. As much as an inspiration he was to Leo Kottke and a million lesser guitarists, Fahey was more an evangelist of the style rather than an innovator, carrying forth techniques from the great blues and rag time players of the 1930s. Paul Simon (or UK guys like Davey Graham and Burt Jansch) were every bit or more the technicians that Fahey was, but they liked entertaining people. AP

As far as I can tell, Fahey (like his British contemporary, Davey Graham) had a wildly uneven career, with his later years showing some decline as alcohol use and other issues mounted. I would guess you did in fact catch him on an off night, Steve, but he was certainly beyond his peak by that point. I will point out, however, that I gave you the incorrect release date of this album, it was 1984 not 1996, which makes it at around the time you saw him.

That said, I seriously doubt Fahey believed he was doing the song "better than Clapton," but rather sought to display the beauty of the melody in an acoustic treatment--something Clapton himself wouldn't attempt until years later.

I may have been the opener for that FC show - if not that one then another. I opened for Fahey twice, once in Atlanta, once in New York. Despite going through a serious Fahey phase in the early '70s, I was disappointed both times - disappointed enough that I put him aside as an adolescent fling (Paul Revere and the Raiders, anyone?) and never really went there again until the day I had to write his obituary for Sing Out! - after which I spent the afternoon playing everything of his that I knew.

In Vienna, overlapping but some years younger than Beethoven, a composer named Carl Czerny did his best (along with dozens if not hundreds of others) to match or at least live up to the master. He didn't come close to making it. His concert works aren't in the repertory and probably don't deserve to be. But his student pieces became part of every intermediate pianist's library, because they offered Beethoven's expressiveness in a form developing players could handle: Beethoven's feeling without the daunting technical challenges.

I think of Fahey that way. He was not a master, but nobody could match him for writing simple, deeply expressive pieces informed by his long study of American roots music (his biography of Charley Patton, written as an MA thesis at UCLA, remains in print). His playing did not live up to his Jove-like attitude, but he was a great teacher and scholar who offered young suburban players a path into the remote fastness, or at least the outskirts, of country/blues guitar.

As for my personal experience of Fahey the two nights I met him. The Great Southeast Music Hall in Atlanta was roughly comparable to the Bottom Line as a hangout for local record-biz types. One such was in the dressing room that night, and when he mentioned that he worked for Paramount Records Fahey positively lit into him for the poor quality of Paramount 78 pressings in the 1920s, well before the poor guy was born. Eventually the flack excused himself and left.

My other memory is somewhat more cliched. In the dressing room downstairs at Folk City Fahey summarily appropriated a half-pint of whiskey I had mistakenly opened in his presence, drank most of it at a gulp, and spent the rest of the evening alternately insisting I find him cocaine ("Aaaaww, you know where there's some cocaine, doncha?") and pinching my ass. His girlfriend took part in these frolics, with the clear understanding (at least in retrospect) that I should accompany them back to the Grammercy Park Hotel afterwards. Occasionally I regret not having done so, but only occasionally.

I think we did two shows that night, and after my second set I fled to the bar were I sat with Erik Frandsen and Odetta. At one point Erik said, not especially softly, "O! tune it, you fraud," which made Odetta laugh, something she never did softly. It's been my experience, as both teacher and student, that all teaching is part humbug and sometimes the most fraudulent teachers have the most to offer. That's certainly true of Fahey, for me and I expect for many others.

There used to be a guitar instructional vhs tape of Fahey and Elizabeth Cotten in circulation. Fahey is a hoot on it. I can't add much to what's said about him above, except that I also doubt that he saw himself as Moses bringing the tablets. His deal, especially given the era when guitar wanking began, was to preserve an unadorned, occasionally idiosyncratic style for the Hartfords, Brombergs and Blakes that were right behind him.

Good point. Compared to Fahey, most of today's "acoustic guitar masters" seem over-finished, all gleaming surface, even, dare I say it, a little corporate?