Voices From the Tomb 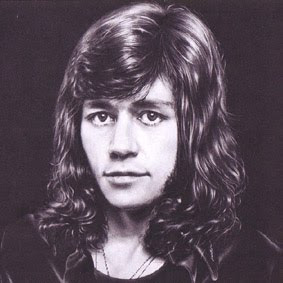 Bevan used that same Bizarro World basso profundo on some of the Move's 60s stuff, but I hadn't heard any of that when I first listened to Message, and frankly I was floored. A part of me still doesn't believe he actually sings like that without benefit of recording studio trickery. As for the song itself (by Move founding genius Roy Wood), it would be a hoot no matter what voice it was performed with; come to think of it, I'd love to hear it by a faux Neil Young.
Posted by steve simels at 12:42 AM

Note to self: Obscure Brits with amazing hair and strange voices less interesting to readers than hoped.

Oh, don't bet so hard on yourself - I listened to at least half of it. Hey - remember the Little Theatre 40 years ago tonight?

I meant "be", not bet. But go ahead, bet on yourself if you'd like.

Hellacious drummer, too, although not evident on that track - but check out some of the lesser-known ELO stuff like "Kuiama" and "Fire on High" for some tasty drumming. My sister had a huge crush on him; I think it was the hair...

I can accept the depth of his voice, but I can't believe a Brit can nail that below-the-Mason-Dixon-line accent so well.

Sounds like the Beat Farmers on a bad day.

What happened to Box Office?

Bev's voice sounds as if it was lowered by some kind of voice filter.