These Are the Savage Young Floor Models

Okay, not really so savage, but definitely Bleecker Street's finest.

The Floor Models. Live at the Other End Cafe. Greenwich Village, NYC. Sometime in 1982-83. 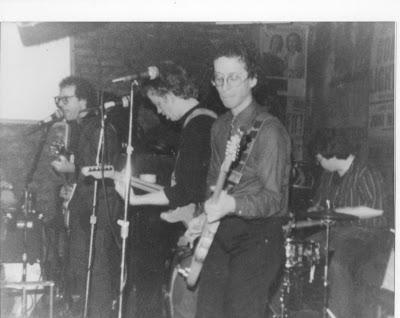 The song in the clip is called "Free Advice," and it was written by the great Andy "Folk Rock" Pasternack (front row, left). It's sung by the bass player (front row, right), some guy whose name rhymes with Sleeve Nimels.

In the interests of full disclosure, I should also add that this was actually recorded at JPs, a club across town from The Other End we played at a lot around the same time. We sounded the same in both rooms, however.
Posted by steve simels at 12:07 AM

You guys were a hell of a great band!!!! How about a reunion gig?

When you guys split up, they had a moment of silence at the Annual Convention of the Optometrists of America.

One of our worst gigs ever was at JPs. It was on July 3rd at 10PM. There were 3 people attendance, which I guess is not bad considering there wasn't anyone at all in Manhattan.

Wow, what a memory, so well preserved. Like . . . like . . . let's say Lou Reed, instead of forming the Velvets, is front man for the We Five, and this unreleased live track from Whiskey A Go Go is intended as first single from a Johnny Rivers-produced debut on Imperial. Except Johnny gets a call to record the theme song for a TV show and forgets all about us. I think that nicely sums it up.

The Brit-accented sound guy at JPs, reputedly a former member of the B 52s road crew, referred to us as "ladies" during the sound check. I tried hard but failed to feel flattered by that. Another random memory: Valerie Landsberg, then of the TV cast of Fame (Doris Schwartz, anybody?) and who I had met very briefly during my day job, was at the bar. She said hello to me, but really just wanted to hear about the bass player. Thank god she spread word to her show biz friends or else Johnny Rivers would never have heard about us. -- AP

Hey, hey! The man could really play AND sing! It gives lie to the old adage that those who can, do––those who can't, teach. Or write. :-)

A real pleasure! Many thanks!

And I mean that as a compliment of course.