Have Guitar, Will Travel

From 1965 -- before an audience of slack-jawed Japanese fans -- please enjoy The Ventures and their incomparably twangy assault on Richard Rodgers' "Slaughter on 10th Avenue." 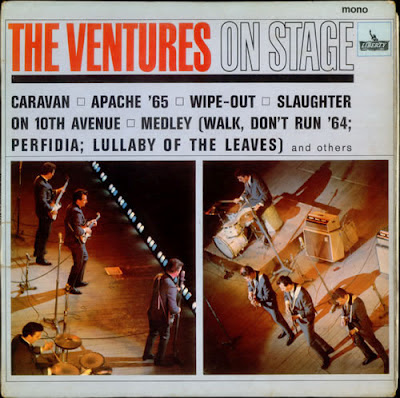 Mick Ronson, eat your heart out.

Seriously, the Ventures live album from which "Slaughter" derives has just been remastered and reissued in all its glory by our good friends at Sundazed Records, still the coolest reissue label on the planet, and let's just say it's killer. At the time it came out, the Ventures brand of instro-rock couldn't have been more out of step with what was happening in the rest of pop, and in terms of public perception the band was decidedly uncool. Nevertheless, several generations of guitar players have stolen licks from it since the day it was released, and nearly half a century later it still sounds fresh as paint.

You can -- and very definitely should -- order it over at Amazon, or at The Sundazed Store where you can learn about more of their splendid audio products.

If you like the Ventures, you should check out the Duo-Tones: two surf-rock legends (Paul Johnson and Gil Orr) playing the classic instrumentals, just the two guitars. Really cool stuff. They have one or two CDs out, and occasionally play shows on the Left Coast.

Great drummer on this. Ringo-like in the best possible way.
Thanks, it all that.

Mentioned this elsewhere, but I was lucky enough to see these guys in a club in the early 80s, when they were having a sort of resurgence with punk/New Wave kids.

They were devastatingly good.

The Shadows did a very nice version of this right before calling it a day in 1969.

This is the only 45 of theirs I ever bought. It's easy to forget how novel their popularity was, especially in the 1950s, when instrumentals were used primarily as bumpers into the news on AM radio stations, usually chopped up. None of their rivals: Johnny & the Hurricanes; Dick Dale; King Curtis; even Booker T & the MGs, couldn't endure commercially the way the Ventures did.

I have a two-CD set Japanese import and it kills! It's guitar playing without a net: No gimmicks (except a whammy bar) to fall back on.

I too saw them in the 80's when Gerry McGee was playing lead and his work on "Green Onions" peeled paint.