Before There Was Either Rock OR Roll (A Thankfully Concluding Series): Special Will Somebody Just Put Me Out of My Misery Already? Edition 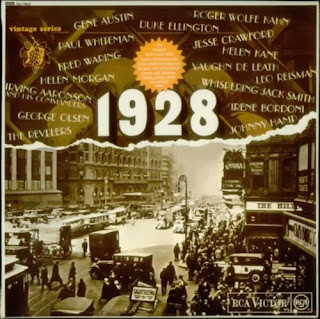 1928, of course, is the year the Miss Fisher Murder Mysteries -- the TV show/obsession of mine that inspired this entire week's worth of postings, is set in. In fact, RCA did a bunch of similar compilations of music from the 20s around the time of this one, and they're not all that different from the Miss Fisher soundtrack album. You may recall that there was a brief vogue for that sort of thing in the mid-60s, mostly inspired by The New Vaudeville Band's execrable hit "Winchester Cathedral," so I assume they were trying to cash in. I actually owned a copy of this album, for reasons that now escape me.

On the other hand, I was tickled when Aaronson's record turned up five years later as the opening credit music in Woody Allen's Everything You Always Wanted to Know About Sex, accompanying a montage of rabbits doing what rabbits do best. 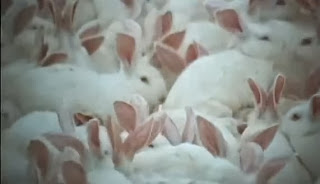 I should also add that another hilarious cut from the album -- the Leo Reisman Orchestra's version of "I Kiss Your Hand Madame" -- is so effete it makes "Let's Misbehave" sound like Black Sabbath.

Back in the day, I actually memorized all the lyrics to the song, and would sing it -- for no earthly reason -- at the drop of a hat. My friends -- and it's a wonder, in retrospect, that I even had any -- were not, how shall I say, amused.

I regret to admit that there is a copy of the Lp featuring "Winchester Cathedral" in my collection, and I'm not sure how it got there.

Oh, c'mon. Anyone of a certain age, if you say to them:

they WILL reply, as if by hypnotic compulsion, by singing Winchester Cathedral.

Listening to I Kiss Your Hand Madame now --

Geez, steve, why didn't the Floor Models ever cover this!?

Your singing to your friends sounds like an episode of "Freaks and Geeks". You could be the next Paul Feig.

Yo, mockers: I owe much of my longstanding interest in this genre to that New Vaudeville Band LP, which I bought on release some 48 years ago. Yes, 'Winchester Cathedral' was a silly little tune, but the bulk of the tracks on the LP were amusing renditions of chestnuts like "Whispering," "A Nightingale Sang in Berkeley Square," and "Lili Marlene." (Along with a couple of vo-do-de-oh-doh workouts, it's true.) The LP taught me a few standards, and accustomed my juvenile, rock-crazed ears to a passable recreation of a long-dead style. I credit the New Vaudeville Band album on Fontana along with the first two Nitty Gritty Dirt Band LPs on Liberty (and Ian Whitcomb's delightful "Yellow Underground") with opening my ears, however mock-seriously, to a very worthwhile period in popular music I probably would have continued to associate with B&W cartoons.

Ian Whitcomb was something of a serious scholar of that era. If memory serves, he wrote a pretty good book about it...

I may have to get this.

My sister and I dressed up in 1920s garb back when Winchester Cathedral was still on the charts and pantomimed the song for the Golden Age club. I used a tennis racket instead of a banjo. Yes, I was a geek.

ian whitciomb used to have a radio show in l.a. that was mostly this era's music.

if you like this sort of stuff (and how couldn't you?),try listening to http://kspc.org/ on sundays 2-5 pst for the "forward into the past" show, with excellent commentary by show host randy brian