It Came From Somewhere

So I was going through my archives the other day, and found two reviews I had done back when I was toiling for the Box Office website and getting free videos up the wazoo. I had forgotten both of these, which are genuine oddities, and since they've gotten no less odd than they were when I originally wrote about them in 2014, I thought I would repost them. 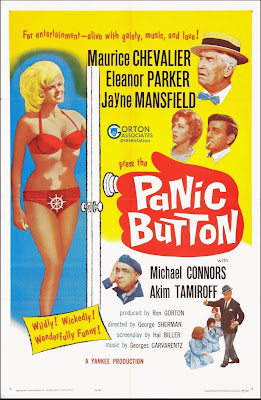 A business group in deep financial doo-doo decides to solve their money problems by creating an expensive and deliberately flop television pilot and using it as a tax write-off. Yes, you guessed it -- this is essentially The Producers a decade ahead of its time, only with Maurice Chevalier and Jayne Mansfield's breasts instead of Hitler jokes. Pretty bad overall -- George Sherman directs with all the subtle comic timing of a Visigoth -- and some of the dubbing (it's one of those American-Italian co-productions) is particularly egregious. But as historical curiosities go it's relatively interesting (Warner Archive's print isn't so hot, however).

Writer/director/producer Arch Oboler is all but forgotten now, but in his day -- which began in radio, with the anthology series Lights Out -- he was highly regarded as a sort of low-budget Rod Serling (he directed Bwana Devil, the film that kicked off the early 50s 3D craze, as well as the wonderful Five, one of the first serious meditations on a post-nuke apocalypse). The Bubble, filmed in Space Vision 3D, essentially anticipates the plot of Stephen King's Under the Dome, but with a more oddball cast, including 50s heartthrob crooner Johnny Desmond and Michael Cole, later of TVs Mod Squad; it was obviously made on a shoe-string, and it's way too long -- a half hour Twilight Zone episode blown up inappropriately to feature film length. But the story, however padded, is compelling and the 3D effects, while a little subtle by today's IMAX standards, mostly keep you hooked. This new version -- the film last played theatrically back in shortened form back in 1976 -- has been meticulously restored by The 3D Film Archive (the trailer above was not, BTW) and looks far better than it has any right to. Kino's Blu-ray version requires a 3D TV or disc player to get the full effect, but if you watch it on a normal video system, it looks just fine in 2D.
Posted by steve simels at 8:23 AM