Alert readers may recall that a few weeks ago I reprinted a review of the Sex Pistols album from back in my dim dark past at the old Stereo Review (now Sound & Vision). I did so a little nervously, if truth be told. When NYMary first gave the spare set of keys to the car here, I'd initially planned to rescue a lot of my old dead tree pieces, but as I mentioned with the reprint, on calm reflection I'd decided it would be a bad idea -- partly because it's a royal pain in the ass to transcribe the damn things, but mostly because after re-reading a decades worth of back issues I had come to the conclusion that too much of my old stuff was either dated, embarassingly wrongheaded or both, and that I really didn't learn how to write until the early 90s anyway.

That said, I chanced across the following Raymond Chandler pastiche recently -- a review of the simultaneously released solo albums by the four guys in Kiss, one of the great examples of 70s excess and nutso commercial miscalculation -- and I think it holds up; in fact, I think it's really quite funny and I'm rather proud of it. See what you think. [A brief note on the dramatis personae: Paulette Weiss was my editor at the mag at the time; (Noel) Coppage and (Joel) Vance were two of our other reviewers.] 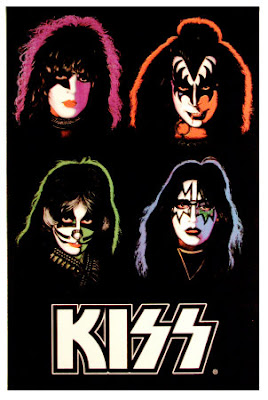 Perfectly done. I can practically smell the gardenia perfume she was wearing ...

It holds up, it's funny, and you should be proud of it!

I wonder how many dozen albums they sold. ;)

Once upon a time FST sent me to the dictionary to look up Mukluks & the Isles of Langerhans. Forty years later Simels sends me to Google to learn about Capezios and Wasserman tests. What a delight. Great stuff like this will never get old Steve.

Who would have thought we'd miss the late 1970s?

The day Gene Simmons came out from behind his makeup, God threw up a little in His mouth.

I remember this review very well, Steve. A classic for the Wasserman test line alone. The only one of the four I can say I ever heard in its entirety is the Ace Frehley one--"a bad punk imitation" is fair enough, the cover of "New York Groove" aside. But you are begging the question, Steve: what would be an example of your old Stereo Review writings that now strikes you as dated, embarrasingly wrongheaded, or both?

TJWood said...
I Steve: what would be an example of your old Stereo Review writings that now strikes you as dated, embarrasingly wrongheaded, or both

Too numerous to mention, alas. And if you think I'm going to put up an example and really make a fool of myself, forget about it.
:-)

I've been a fan of your writing since I was 13 and it was 1976. I remember this Kiss review well, and I dare say I'll remember anything else that you wrote between '76 and '81, if you choose to post it. I suggest that you do so as often as possible. The stuff really holds up, Steve--your "Never Mind the Bollocks" review was also a refreshing blast from the past. You, Bangs, Nick Bent and HST were incredibly inspirational to me back then, and I'm pleased as hell to have found you again on PowerPop, which is an excellent site. In fact, I ended up on PowerPop because I was searching for a review of a Springsteen show at the Bottom Line from maybe '76, which I swear you wrote in "SR." I might be wrong about that, but I'm glad I found ya!

Springsteen show in 75, I think. I've actually been mulling posting it...

But in any case, thanks so much for the kind words -- they're deeply appreciated. Glad you're enjoying the site, too.

I have two of the four albums, NBLP 7123 Paul Stanley (unopened), and NBLP 7121 Ace Frehley. I was wondering if anyone knew how I would be able to have them autographed my both of them??? These were the first rock-n-roll records our parents bought us and thought it would be nice to have them signed....Chris