From the Associated Press:

DETROIT - The lights dimmed, the sold-out hall grew hushed and out walked the conductor - shiny, white and 4 feet, 3 inches tall.

ASIMO, a robot designed by Honda Motor Co., met its latest challenge Tuesday evening: Conducting the Detroit Symphony in a performance of "The Impossible Dream" from "Man of La Mancha."

"Hello, everyone," ASIMO said to the audience in a childlike voice, then waved to the orchestra. 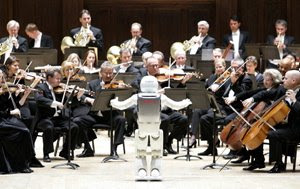 As it conducted, it perfectly mimicked the actions of a conductor, nodding its head at various sections and gesturing with one or both hands. ASIMO took a final bow to enthusiastic shouts from the audience.

"It is absolutely thrilling to perform with the Detroit Symphony Orchestra. This is a magnificent concert hall," ASIMO said.

Later, cellist Yo-Yo Ma joined ASIMO onstage to receive an award for his efforts in music education. Ma bent to ASIMO's height and shook the robot's hand. Ma performed later on the program but didn't take questions from the media about ASIMO.

To be honest, I'm not sure why this is such a big deal. Seriously -- how is this any different from any David Bowie gig you've ever seen?
Posted by steve simels at 10:00 AM

Well, were there mylar balloons?

I saw Bowie in LA on the Serious Moonlight Tour, and lots of lovely golden mylar crescent moons dropped from the ceiling. Yes, I took one home and pinned it to the bedroom window shade. Yes, my boyfriend asked if he could keep it when I returned to college that Fall...

I wonder if that robot would like to come over and conduct some ribs into the oven, toss a salad, and clean the toilet. Maybe I should call the old boyfriend?

Seriously -- how is this any different from any David Bowie gig you've ever seen?

Um, the robot was friendly?

I saw the goofy little robot and the orchestra this morning on the teebee before I left for work.

It was real early and I wasn't in the mood for cutesy-pie.

Maybe next they can have robot musicians, too ... and then a robot audience.

I was at the Metropolitan Opera one night to review the opening of Janacek's "The Makropoulos Case" when a tenor had a heart attack onstage and died. If a robot had been conducting that night the music would have gone on until someone came out and switched him off.

You've played on stage with plenty of robots.