It's Only Money, Tyrone

Well, here one is, finally.


Josephine cracked; her eyes black and bloodied
Screamin'"Gimme back, back all that money Tyrone"
So he snapped her neck back and slapped his lover
Put a bullet in her brain
and threw her body off the
bridge

Well nothin' was found
'till the Brown River flooded
And driftin' down, down went a
lifetime of things
Stolen cars; cracked up, handguns and
bodies
Given back, back to the world up
above.... 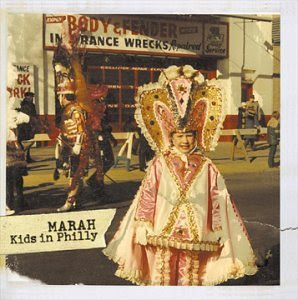 Nick Hornby, who's got pretty good taste, thinks these guys are the best band in the world, and I suspect that on some nights, somewhere, he's probably right. Incidentally, good as that performance is, it doesn't even come close to the studio version; you can find it -- and most definitely should -- on the band's 2000 Kids In Philly, which remains one of the very best albums of the decade now almost completed, and which behooves behearing.
Posted by steve simels at 9:53 AM

Gee! Such an uplifting song!

Great shit!!! Never heard of them. Thanks for the heads up. My kind of rock & roll!

I thought that title belonged to the Derek Trucks Band.

Nod to Steve Earle's e-squared for putting out Kids in Philly.

In your recent "streets and such" round-up, NEITHER of us had the presence of mind to remember Marah's "Christian Street." Great fucking song. (And the last time I saw Hornby read, I gave him a copy of the same bootleg that I sent you a long time ago. He seemed to be pleased...)

The band's in a state of flux now, doing mainly acoustic shows with a scaled down version of the band. Brother Serge is out with a new baby. Still, next to a certain bunch of guys from New Jersey, this is probably the best live band you'll ever see. Damn nice guys (and a gal), too.

Kids in Philly changed my life. I was evangelical about it, making my friends and my brother buy it. I met Dave Bielanko on the Kids tour and told him his band should be huge. His response: "We're working on it." If only.

If you've never seen a full-blown live Marah show, your life is incomplete. At a show in Baltimore (they did "Baba O'Reilly"!) I was part of an audience that clapped and cheered after the show until the roadie came onstage and starting unplugging the guitars. Yes, they are that good.

you gotta be kidding me. The Godfathers in their prime ate this stuff for breakfast.