Tales From the New Depression

From our Department of A Picture Really is Worth 1000 Words, But I'll Keep It Somewhat Briefer:

From sometime in the 1930s, here's a truly amazing photo of none other than James Cagney playing -- and I'd say with a pretty fair degree of skill from the look of it -- a gorgeous Martin C-2 guitar. 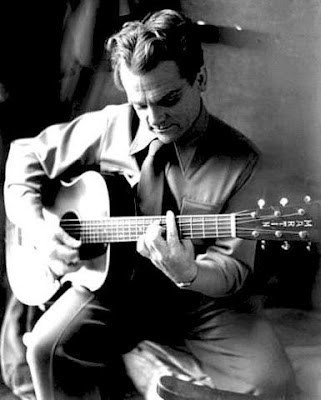 What I wouldn't give to know what kind of music he was essaying here. Country music a la Jimmie Rogers? Some of kind of blues or folk, in a Woody Guthrie-esque vein?

And before you scoff, that kind of cultural assimilationism isn't particularly far-fetched. In fact, in one of his early pre-Code films (where he was playing a cab driver, if memory serves) Cagney -- who grew up on New York's Lower East Side -- can be heard speaking highly credible and fluent Yiddish. Go figure.

Looks like an A7 chord. So maybe something bluesy?

And a pretty good hoofer too.

Jimmie Rogers is a good guess. I looked and found another picture with him holding a different, slot headed parlor guitar, and playing an "A" chord, but not a barre.
I found this comment, too:

"If you want to see Cagney play guitar, he's good, rent or get the movie "Oklahoma Kid"
with Cagney and Bogart!"

Alas, that clip on YouTube has Roy Rogers dubbed in on the soundtrack.

I think Cagney grew up in Yorkville (the East 80's) rather than the LES. No clue as to what he might be playing.

According to Wiki, Cagney did in fact grow up in the downtown land of my ancestors.
:-)

His brother was a dentist, you know. The dentist of none other than a young Donald J. Rickles. As I inform every person who attends one of my shows. Dr. Cagney introduced me to his brother James, who asked me if I was ready for show business. If I was ready for [in Cagney voice] rejection, rejection, and moooore rejection?

I never saw him play the guitar, but I saw him sing and dance. Again, if you see my show, I do a poor I'm a Yankee Doodle Dandy and hoof it up [at age 86, mind you].

Am I seeing things? Did the great Don Rickles actually comment on PowerPop. Unbelievable!

Anyway, Mr. Rickles, you're one of my favorite comedians of all time. Stay well.

Thank you for your kind words. I remain in good health.

Nice scowl, smiley; did you sit on a duck?