The Genius of (No Kidding!) Dave Davies

From 1970 (and the B-side of the American version of "Lola") please enjoy The Kinks with the absolutely astounding Dave Davies written-and-sung rocker "Mindless Child of Motherhood." 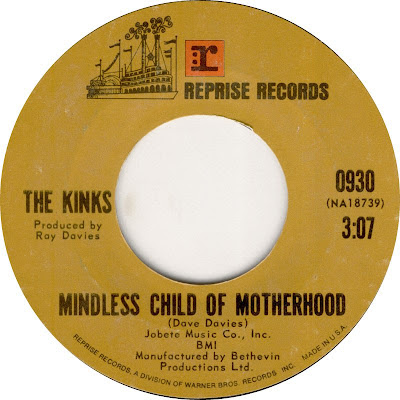 Younger readers will have to take this on faith, but in the late 60s and early 70s, songs like this one generated a great deal of "Dave Davies is a genius who should make a solo album" talk in rock hipster circles. Said talk rather precipitously declined after 1980, when Dave finally did make a solo album (which in retrospect, I actually rather like, but never mind).

In any case, this is an absolutely freaking killer track, and this is by far the best sounding version of it I've ever heard. It derives, BTW, from the splendid Dave Davies Hidden Treasures album that Universal put out in 2011 as part of their fabulous series of Kinks reissues; it collects just about everything Dave wrote or recorded in the 60s, both with the Kinks or for solo singles under his own name (all with superior sonics) and it's well worth your attention.

Truly a great lost Kinks classic. Dave wrote several good tunes during the "Lola" period. "Strangers" was used beautifully in Darjeeling Limited. Glad to see you giving him some props - his brother gets all the glory.

I remember hearing this for the first time on "Kinks Kronicals" and being blown away. It would have made a good A side itself.

One odd note; looking at the pic of the 45, I noticed the song was published by Jobete Music; that's Berry Gordy's Motown outlet.

I noticed that too -- I wonder what the story with that it is.

I bought that album my freshman year of college ('73) -- don't even remember why I bought it, I only knew the Kinks from their hits. But that collection was a revelation. It was like NOTHING else I listened to at the time: in place of psychedelic jams and surreal lyrics, there were sharp, concise vignettes of English life set to tightly arranged pop music. To top it off, some of the best liner notes I had ever read, placing the Kinks, Ray Davies in context in such a way as to actually make the music even better.

I listened to Kronickles constantly back then, amidst all the Grateful Dead, Hot Tuna, etc. It was a wonderful example of what the old vinyl format could be (try stuffing those liner notes into a CD booklet in 6 pt. type and see what I mean).

I wonder how many of the English punkers were listening to Kronickles in the days before the Ramones showed them the way forward....

To give the devil his due, those liner notes for THE KINK KRONIKLES -- which are as wonderful as you suggest -- were written by John Mendelssohn, a Rolling Stone critic who was one of the Kinks major boosters. (He also wrote a Kinks bio in the 80s in which he quotes a bunch of my reviews, so I'm prejudiced).

I'm pretty sure he was the driving force behind the entire album, if memory serves.

John Mendelssohn is alive and kicking hard. Although his blogging is intermittent compared to S.S., he's been back at it lately here: http://johnmendelssohn.blogspot.com/

Well, Dave is an "over-shadowed" talent if nothing else. Had he been someone else's brother, it probably wouldn't have been so hard to get rightfully recognised as an individual talent.
Been listening to his "Bug"(2002) album a bit lately. A bit nuts at times, taking into account all the U.F.O. nonesense he's ever so keen on (read his book - it beggars belief), but musically it's a revalation at times. And VERY Kinksy...

I'm down with the Kronikles, too.

I'm remembering my copy of "Lola" came with "Apeman" on the back, and also said "cherry" cola.

Kronikles was my introduction also - incredible set of tunes....as an aside, I picked up a DD 'autobiography' sometime in the 90's off the $2 bin....it kind of went boring along the usual lines until near the end when he went on this crazy bender about communicating regularly with aliens - it was almost like reading a comic book but the tone was serious... wish I still had the book but gave it to a buddy that was a huge Kinks fan....I didn't tell him about the alien stuff and he shows up at work one day (we worked together) and was going nuts laughing about it and giving me grief for not warning him... great stuff if you can find it. Hopefully, Dave is on calmer drugs these days.... : )