Days of Miracles and Wonder

So a certain shady dame and I checked out director Malik Bendjelloul's astounding new documentary Searching for Sugar Man the other day, and I have three words.

Of course, since it's currently only playing in theaters in New York and L.A., this may prove difficult, but even so, I'm not letting you guys off the hook.

In any case, as you may have gleaned from the trailer, Searching for Sugar Man is a music flick, a real-life detective story, a meditation on class and the transience of celebrity, and about a zillion other wonderful things. Plus it's very funny, it'll bring a tear or two to your eye, and it'll make you an instant fan of the music and the man at the heart of it. 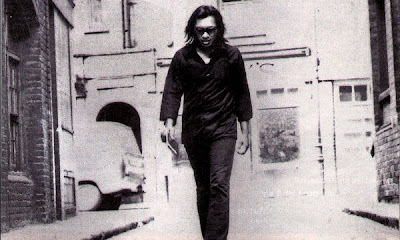 Seriously -- it's like Anvil! The Story of Anvil if Anvil had turned out to be absolutely brilliant, charismatic and an inspiration to literally millions of people in the fight against oppression, rather than just a bunch of endearing doofuses.

I can't say much more about the film without giving away a lot of its secrets, which would ruin the fun, but this bit from the review in the N.Y. Times gets it just right:

Mr. Bendjelloul doesn’t dig deeply into why Rodriguez, a dark-skinned Mexican-American who sounds like (for starters) Bob Dylan, James Taylor and Nick Drake, was embraced so passionately by white South Africans under Apartheid. Rather he accepts the declarations of love and fan explanations that it was the right music for a country in lockdown. That scarcely seems like the whole story, especially for such a complex country, and while occasionally the movie teeters close to embracing bromides about the universal healing power of pop culture, there’s too much sincerity in “Searching for Sugar Man,” too much love and enduring human mystery for cynicism to take hold. In the end Mr. Bendjelloul went looking for a man and found something much greater.

OK! Some of my pals have been speaking of this, but your endorsement carries a little more weight. :) - bill buckner

I am informed that it is also playing in D.C., for those of you without representation in our noble democracy.

It's easily my favorite film of the year, and the problem is that it's impossible to talk about with folks who haven't seen it without spoiling the story.

Via the intertubes, I have just learned that Rodriguez will be performing on the Letterman show in mid-August. Watch you TV listings, obviously....

I saw a preview of this film in Southampton with a Q+A with the director afterwards (hosted by Alec Baldwin.) Following the Q+A, Rodriguez himself came out with a guitar and did 2 songs! (He was playing the Stephan Talkhouse in Ammagansett the next day.) They mentioned the Letterman appearance too.

the soundtrack is on eMusic....