The below video, produced by Adrian Bliss for the comedy network Dead Parrot, provides a dramatic reenactment of an actual (and perfectly typical)
YouTube comment war: an empty and vile back-and-forth that originated beneath a popular One Direction video. The simplicity of the concept is
brilliant and its execution is flawless.

To which I can only reply -- ditto! 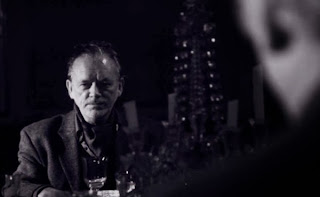 Seriously, I could give two shits about One Direction or any current boy band, but this is out of control hilarious -- it's like watching two immature teenage girls portrayed by Sirs Alec Guinness and Ralph Richardson.

The older I get the more I appreciate the craft of acting.
This is why.

This is hilarious -- did it precede the Malcolm MacDowell/James Earl Jones Facebook commercial? I don't know when that first aired, but it makes me laugh just to think about it.

Not sure--it may have been, as they say, inspired by.

what is it about an English accent that gives such gravitas to the dialog regardless of the actual content?

That is the actor's craft.
My 14 year old Youtuber daughter, who is also an anglophile, loved it, BTW.