I must confess that I never paid much attention to Hicks during the Hot Licks days, although I grew to appreciate him and them years later.

But what really blew my mind was discovering his original band The Charlatans via a 2004 best-of anthology on the British Big Beat label. 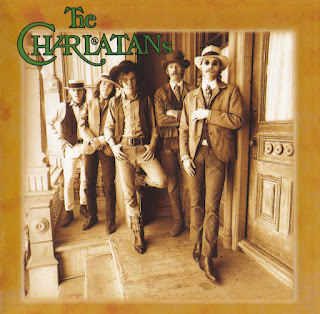 That's Hicks, second from the right, on the album cover for those of you playing at home.

And here's a representative song from the album.

Those guys pretty much kick-started the entire San Francisco scene of the late 60s -- Jerry Garcia famously said that the Charlatans' Mike Wilhelm was his favorite guitarist -- and, as you can see, although they didn't have the commercial success of the Dead/Airplane/Quicksilve/Grape etc., they were by far the snazziest dressers of the bunch. 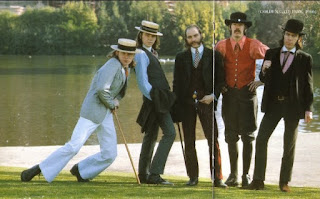 Meanwhile, you can -- and definitely should -- order that Charlatans compilation over at Amazon HERE.

Have I mentioned that this death shit is really starting to piss me off?
Posted by steve simels at 7:52 AM

Can't let this pass without comment...I was never the biggest Dan Hicks fan, but his second album, "Striking It Rich", on Blue Thumb was on heavy rotation when it came out, and I still play it a few times a year. It features one of his best-known songs, "I Scare Myself", simply a beautiful tune.

This death shit is well past pissing me off. RIP, Dan.

His "Beatin' the Heat" album from a few years back is worth checkin' out. Not too shabby.

"Where's the Money" and "Striking It Rich" are classics. Saw him during that time frame with Sid, Maryann and Naomi at the Troub a few times. More recently, post millennium, I saw him at the Coach House in San Juan Capistrano with his new girls Jessica Harper and Karla DeVito. Always a very enjoyable show.

For years I wanted to get my hands on a Charlatans "Seed" poster. But some things are just impossible. I remember "The Shadow Knows" being played on local radio in late 1966. Unfortunately not as much as "Snoopy Vs. The Red Baron." The Charlatans had a fucked up, poorly guided career. Why it took them till 1969 to release their LP escapes me. Got a couple of bootlegs of them too. One has live stuff from the Family Dog on the Great Highway. The one that was on Groucho Records pretty much all ended up on the Big Beat comp.

The Big C claims another one. Too bad. I would have loved to imbibe at the Red Dog Saloon and hung out with Lynn Hughes. That bitch could sing.

VR - looking forward to my special place in hell

I played "Moody Richard" when I heard the news. And Mike Wilhelm ran the open mike at the Coffee Gallery when I was living in SF. In 19 f***ing 72. (That's 44 years ago, kids, before your gym teacher was born.) He used to walk a matched pair of Russian Wolfhounds on Grant Avenue.

He also has a fun cameo in the film "Fillmore," getting thrown out of Bill Graham's office. His departing words are "F*** you and thanks for the memories."

I love the Charlatans record and decided to pull it out after reading your post. I have a vinyl reissue which states on the back cover that Hicks already left to form the Hot Licks before the record was recorded. This was news to me and I'm surprised I hadn't noticed that all the years I had the record.

Hicks is on every track, either on drums or guitar, on the Big Beat compilation "The Amazing Charlatans." Originally issued in 1996, that release is referred to and pictured at the top of Steve's post.

But the version of "Alabama Bound" presented as a representative song from the Big Beat album is not even on it. The version Steve presented is from the self-titled 1969 album, of which none of the songs are on the comp. As Sal said, by that time Hicks was long gone.

There are a handful of versions of "Alabama Bound" two of which are on the Big Beat comp. A short version from early 1966 and a longer version from summer 1967, which is boss.

I prefer the comp, which is all earlier stuff with Hicks, to the 1969 official release. But they both have some sweet moments.