From 1973, please enjoy Stealer's Wheel and "Everyone's Agreed That Everything Will Turn Out Fine," their fabulous followup to that song in the Tarantino movie whose name now escapes me. The single version, in stereo. 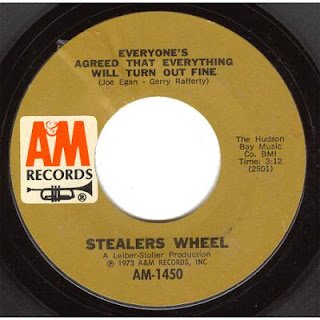 The short version: As I said, this was the followup to "Stuck in the Middle," and it flopped, inexplicably. The band then re-recorded it, hideously, for their second album, and that's the only version that has ever appeared on LP or CD since. Why they re-recorded it I have no idea, as the original is as close to perfection as any record ever gets; as you've heard by now, if "Stuck in the Middle" was the band channeling Dylan, this one is them channeling Revolver and late 60s pop psych in general. Simply gorgeous.

In any case -- enjoy the damn thing.

I should that I originally posted this about a decade ago, but as long-time readers are aware, just about every audio clip I've ever put up over the years no longer works, because Divshare has apparently gone bye bye. So from time to time, I'll be re-posting songs that behoove behearing. This one, I think, eminently deserved to be restored to the intertubes.

Reservoir Dogs, name of the movie. This was a good song by Rafferty.

I was kidding about the movie title.
:-)

Nice rarity! I always loved "Star" -- that should have been a bigger follow-up hit for them.

This song has been on my iPod since you first posted it however many years ago.

I remember you raving about the single back in the day so I ran out and got the single. It truly is a R&R treasure.

I'm still iffy on Rafferty's production on Richard & Linda's "Shoot Out The Lights".

"Everything's Agreed..." and "Star" were Top Twenty hits in Berdoo. Remember them well. I like "Stuck In the Middle" the best of the bunch. Just rolls out easily and seems the least self-conscious of the bunch. The minute you first heard it you knew it was destined.

Also, the 45 version of the song is available on CD. Not sure if it's still in print, but in the late 1980's a Dutch music journalist friend of mine sent me a copy of "The Very Best Of Stealers Wheel" It's possibly a Dutch TV offer CD on the Arcade label. The good 7" version is on it and the influence of George Harrison pours out.

BTW, Luther "Small Dick" Grosvenor/Ariel Bender is playing guitar on this one I'm told. So props to him.

I remember hearing the single, and buying the album and being really confused. It didn't sound the same. I have a cd "Best Of" somewhere and VR is right. It's the 45 version.

The six-member lineup was short-lived. Thereafter, Rafferty and Egan adopted the Becker and Fagan method of using studio dudes for albums.

I've changed my mind. Upon further reflection, I prefer the re-recorded album version.

But the single's got hand claps! It evokes Beatles and Hole in My Shoe era Traffic.

As much as I dig Tony Joe White whomper stomper guitar stylings, I don't think they are suited for this number as recorded on the LP re-do.

VR - off to Snow Summit

I really love this song. Great to hear another take on it.