Which One's the Stewardess?

From sometime in late March or early April 1967, please enjoy the incomparable Jefferson Airplane -- making their New York City debut, to an audience that may have included some guy whose name rhymes with Sleeve Nimels... 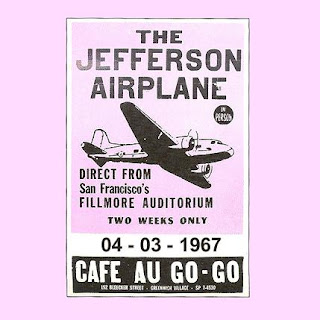 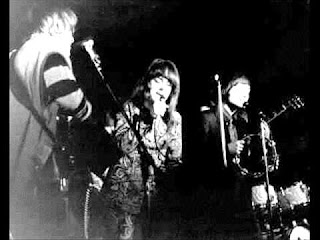 ...and a terrific live performance, with remarkably good sound, of "She Has Funny Cars," perhaps my favorite song from the then just released Surrealistic Pillow.

I was at one of the Au Go Go shows, although I can't say for sure it was the one in the clip. In any case, I remember the band was overwhelming on every level, including the visual -- they were without question the coolest bunch I had ever witnessed at that point in my young life.
Posted by steve simels at 9:06 AM

Nice. The riff is reminiscent of the Monkees' "Last Train to Clarksville". 8^)

I saw the Dead there in their first NY appearance a couple of months later. Took about three days for my ears to get back to normal. The place was small, and they were LOUD.

Tight but loose. Love the end bit with that trademark Jorma tone and attack

Saw them a bunch of times during this phase. Once, Sandy and me were thumbing to the beach on the weekend and we got picked up by a couple of guys who convinced us to go to a Love-In with them. They didn't have much trouble doing so because it was a bit too cold to go to the beach. It was in Orange County. The bands were the Airplane and Buffalo Springfield. Both bands were hot that day. We kept ourselves warm with Brandy and body heat. 60 degrees in California can be quite chilling. They had no idea how young we were and it was best kept that way. Good times. Lasting friendships were established. One of those guys had a pilot's license and I'd go up with him a lot. He's the reason I got mine when I reached the legal age. He became a commercial airline pilot for many years.... but I digress.

That au Go-Go show has really good sound for an old tape! Groups seemed to have a way more unique and indentifiable sound back then. This was the template from which they launched a million trips.

Sandy and me worked out alternate car lingo lyrics which extolled the virtues of Shirley Muldowney. It was a fun goof.

"...but I digress." self awareness briefly rears its head.

ha! my daughter said the same thing when she read the 'my sexy pre-teen daughter'post a while back.