it's the Last Gasp of Chris Hillman Week!!! 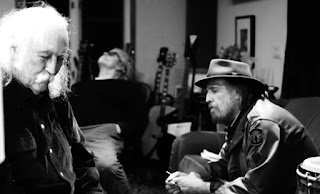 ...please enjoy founding member of The Byrds (and the biggest influence on my own, inadequate by comparison, bass playing) Chris Hillman and "Here She Comes Again."

This was apparently originally written back in the late 70s for a McGuinn, Clark and Hillman studio LP (although I'm told it only ever appeared on an Australian live album) but it's obviously a pretty cool song despite its previous obscurity. And yes, Roger McGuinn himself is doing the great Rickenbacker 12-string stuff; Hillman plays bass on the record (his first appearance on the instrument he essayed in the Byrds in 30 years).

Bottom line: The performance is gorgeous, and for the two minutes and thirty-two seconds it's blasting from my stereo, I can't help but feel that God's in his heaven and all's right with the world.
Posted by steve simels at 8:12 AM

Off topic, but just saw where Tom Petty was rushed to the hospital in full cardiac arrest where they found no brain activity and took him off life support.

This is beyond sad.