Your Thursday Moment of Words Fail Me

From 1983, please enjoy the great Southside Johnny and the Asbury Jukes doing a live medley of...Eddie and the Cruisers songs?

I hadn't heard about this till last week, but there was a scene in the original script in which the character played by Tom Berenger -- the keyboard guy from the Cruisers back in the 60s who can't escape his past -- goes to a Jukes show and is stunned to hear the band playing songs by his old group. Director Martin Davidson actually shot it, although ultimately it didn't make the final cut, but as you can hear the audio has survived. 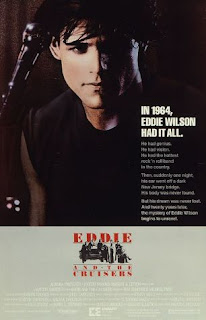 I must admit that the film is a sort of guilty pleasure for me, as are the songs on the soundtrack, which of course are written by John Cafferty, aka the poor man's Bruce Springsteen. It's not a very good movie, really, but it has a couple of interesting things to say about dreams that don't come true, friendship, and things of that nature.

Plus: Ellen Barkin.
Posted by steve simels at 9:22 AM

What a hoot! This sounds really good!