Weekend Listomania: Special Broadway is Not in Asbury Park Edition

Well, it's Friday, and as you may have heard, tomorrow is a) a major milestone birthday and b) the day a certain Shady Dame of my acquaintance is consequently taking me to see Springsteen on Broadway. 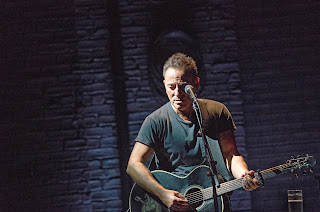 From the NY Times review of opening night:

There came a moment the other night, near the end of Bruce Springsteen’s overwhelming and uncategorizable Broadway show, when it seemed possible to see straight through his many masks to some core truth of his being.

This was when the audience, which had mostly restrained itself through the first 13 songs of the 15-song set, could no longer sit on its hands as if in church. The show had been, to that point, quite solemn — and would continue to be.

But now, entire swaths of the Walter Kerr Theater, apparently unmindful of downbeat lyrics like “I ain’t nothing but tired,” started clapping along to “Dancing in the Dark,” Mr. Springsteen’s biggest hit, from 1984.

He stopped cold. “I’ll handle it myself,” he said, shutting them down with a small, sharky glint of a smile.

Would he ever! Make no mistake, “Springsteen on Broadway,” which opened on Thursday evening, is a solo act by a solo artist with an artist’s steel. Even though Patti Scialfa, his wife, shows up to harmonize on two numbers, this is not a singalong arena show or a roadhouse rouser. Even less does it try to be a feel-good Broadway book musical or a slick, whitewashed jukebox like “Jersey Boys.”


In other words, this is not an "And Then I Wrote" retrospective.

That being the case, a coveted PowerPop No-Prize© will be awarded to the first reader who -- to my satisfaction -- comes up with a list of the following:

Best or Worst Springsteen Songs He Probably Won't (Or Shouldn't) Do in His Acclaimed New One Man Show!

5. You'll Be Coming Down

From Magic, which was precisely the moment when I stopped being a lapsed Bruce fan. Sort of cynical folk rock, and the band performance and production are chilling.

4. The Girls in Their Summer Clothes

Also from Magic, and one of Bruce's best Brill Building homages ever.

This has always struck me as one of Bruce's most under-appreciated British Invasion pastiches; I mean -- does anybody else think it sounds kinda like The Yardbirds? In any case, thematically I just don't see it working in the show.

2. Prove It All Night

I'm sorry, I have never warmed to this one for any number of reasons I won't get into. Although I will admit that part of it is that I hate Jon Landau's production on Darkness with a white hot hatred and always have.

And the number one Springsteen song that should be a rock standard that I won't get to hear tomorrow unquestionably is....

His big power pop move. He used to open with it on the Darkness tour back in the late 70s, which was a pretty ballsy thing to do given that he wouldn't release the song officially for another couple of decades.

And have a great weekend, everybody!!!
Posted by steve simels at 8:19 AM

I'm tempted to make a list of all of the great covers he's done in concert. What's a Bruce show without some great bar band covers?

And pretty sure he won't do The Angel.

I have a love/hate relationship with the song, The Hitter, from Devils & Dust. It's an incredible "story" song that, essentially, re-tells the story of Bruce Willis's palooka character in Pulp Fiction. But it's been completely overlooked, IMO, because Bruce mumbles the lyrics so badly. Unless you're reading the lyric sheet, I'm not sure you could make out one word in three.

Come to the door, Ma, and unlock the chain
I was just passin' through and got caught in the rain
There's nothin' I want, nothin' that you need say
Just let me lie down for a while and I'll be on my way

Here's the final verse:
Tonight in the shipyard a man draws a circle in the dirt
I move to the center and I take off my shirt
I study him for the cuts, the scars, the pain,
Man, nor time can erase
I move hard to the left and I strike to the face

Imagine what that might sound like if he enunciated even just a little. He doesn't need to have Meat Loaf's famously good diction, but surely he can do better that the D&D version.

(There. I've finally got that off my chest)

Blinded by the Light.

Funny, one of my favorite Springsteen albums is Darkness. Because he finally decided to pay his guitar.

I can't imagine Bruce attempting "Thundercrack" solo. It would be interesting though.