Dr. Shithole, or How I Learned to Stop Worrying and Love the Bomb

This was the first non-classical record I can remember my parents owning when I was just a tadpole... 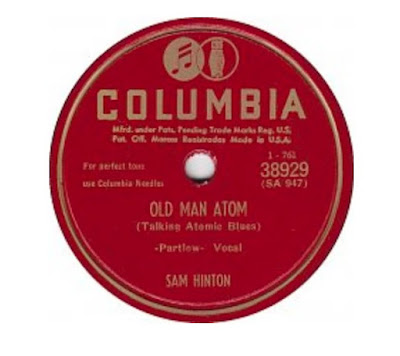 ...although I have since learned that it was originally released on the much smaller ABC label and that Columbia picked it up for distribution once it started to get a little airplay. It was also rather controversial in its day; both the Hinton version and a slightly bowdlerized cover by The Sons of the Pioneers on RCA Victor were briefly banned from radio.

My favorite lyrics come at the end:

"So the moral is this, just as plain as day
That Old Man Atom is here to stay
He's gonna stick around, that's clear to see
But, ah, my dearly beloved, are we?

So listen, folks, here is my thesis:
"Peace in the world, or the world in pieces!"

At which point, some genius producer -- and this is before digital recording, mind you -- dubs in the sound of an A-bomb detonating.

That said, I bring it up because over at the leading journal of the Right a major asshole conservative pundit is saying that there's nothing to worry about, potential ICBM attack on Hawaii-wise.

As noted by the great Roy Edroso over at ALICUBLOG:

Prepare to live. As tempting as it may be, don’t spend the precious minutes between missile alert and missile impact texting family, sending tearful goodbyes on Snapchat, or attempting to reconcile old grudges. Don’t do it.


Your family will respect you more, knowing that in the final hours you didn't go all wobbly and tell them you loved them.

First, you have to understand that the odds are overwhelming that you’ll survive an initial blast. Nuclear weapons are devastating, but it’s a Hollywood myth that any individual strike will vaporize an entire American city, much less the suburbs and countryside…

Hollywood always exaggerates these things. For instance, they never show you the parts of Hiroshima that were open for business the next day.

You can read the rest of Edroso's epic stupidity smackdown over here.

In the meantime, re: French -- to paraphrase Gene Hackman in Superman, it's amazing his brain generates enough energy to peck out that drivel on his computer keyboard.

That is pure propaganda. Such hogwash.

The survivalist crowd is going to be soooooo embarrassed when they read that column.