Places Bruce Springsteen Fooled Around With Your Daughter

This is by Amanda Hale, and it originally appeared at McSweeney's on May 20th of this year. 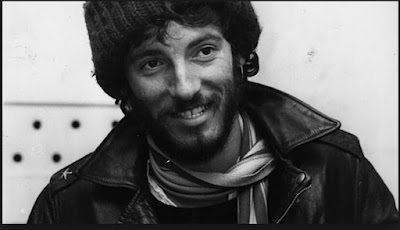 On the boardwalk way past dark

Behind the walls where heat lightning falls

Beneath the waves at twenty-thousand leagues

Where the distant oceans sing, and rise to the plain

From the coastline to the city

A place where the dancing’s free

Way down beneath the neon lights

Laying in a field on a summer’s day

Out where the river runs

High in the green hills on the outskirts of town

Over mountains draped in stars

Hiding on the backstreets

In the darkness on the edge of town

Where the caravan camels roam

On a rattlesnake speedway in the Utah desert

Out by the gas fires of the refinery

Past the salvage yard ‘cross the train tracks

On a deserted stretch of a county two-lane

That dusty road from Monroe to Angeline

In her pink Cadillac

Also: hide that girl away, if you know what I mean. For her own good. Seriously, I wouldn't trust that Springsteen guy as far as you could throw him.

Have a great weekend, everybody!!!
Posted by steve simels at 6:32 AM