Bringing It All Back Home: A Journal of the Plague Year

[I originally posted this back in 2009, if you can believe it; I'm reposting it now because a) it's a pretty amazing story and you may have missed its earlier incarnation, and b) because the music clips, which are the best part of the story, were on Divshare and those links have long since expired. In any case, enjoy. -- S.S.]

So as I've mentioned on a previous occasion or two, I was one of the gazillion kids back in the mid-Sixties who took a gawk at The Beatles on TV and thought, hey, that looks like fun. Unlike most of them, however, I was lucky enough to be in a garage band (we were called The Plagues) whose guitar player had an uncle who ran a major New York City recording facility.

The place was called Associated Studios and it was located at Broadway and 48th, up the street from the legendary Brill Building, down from what's now the Ed Sullivan Theater (home of the Stephen Colbert Show) and next door to what was then called the Metropole, which was the only topless joint in Manhattan at the time. 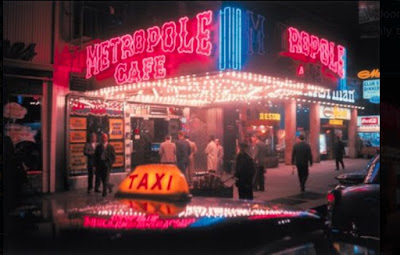 I knew the place was a big deal, of course, but at look at its Wiki entry has kind of floored me. Dig this partial(!) list of people who recorded there over the years.

Anyway, because (as I mentioned) the Plagues guitarist's uncle owned the joint, we used to go into the studio every couple of weeks and make demos of our own (obviously derivative) songs, which we got to take home on low-fi, scratchy and prone to breakage, 45rpm acetate discs (reel-to-reel tape was expensive, so they rarely gave us tape copies. And of course there were no cassettes yet).

The engineer on some of our sessions was a classic New York music biz type named Warren Schatz. A schlubby little guy a few years older than us, he was convinced he was going to be a star someday, and perhaps as a result of that certainty he was also relentlessly trendy; I vividly recall the time he showed up wearing a ridiculous Bob Dylan cap, which we all had a mordant chuckle over. He'd also actually released a bunch of singles -- under the nom du disque Ritchie Dean -- on Tower Records, a Capitol subsidiary (Freddie and the Dreamers and The Standells were technically his labelmates), and we were sort of in awe of him despite everything.

Cutting to the chase: Some time in the late spring of 1965 we recorded one of our originals at Associated -- a Beau Brummels -inspired ditty called "The Loss is Mine" -- that Warren/Ritchie liked enough to rewrite the lyrics and demo himself (with us providing backup) a few weeks later. Shortly thereafter, our sessions at Associated basically ended as some of us went off to college, and I've always wondered whether the song was ever released or what happened to Warren/Ritchie.

Well, thanks to the Google now I know -- turns out he enjoyed some considerable success as a producer and arranger in the disco era (producing Vickie Sue Robinson, no less). I also found a discography of the 60s singles released on Tower; although they include the complete ouevre of Ritchie Dean, "The Loss is Mine" is not among them.

Okay, like I said, I've told this story before, but here are the promised kickers.

I long ago lost my copy of "The Loss is Mine," and at the time I started working on this piece I hadn't talked to bandmate Allan Weissman (a fellow Teaneck kid who wrote the tune) since our 20th high school reunion in '85. But thanks to Facebook, I eventually hooked up with Al, and to my amazement he still had his. Even more amazing, it was still playable -- barely, and with hideous scratches, pops and clicks, but as it turned out ultimately salvageable by a brilliant engineer of my acquaintance who restored it to something very close to its original pristine state.

So here it is -- from probably the last surviving acetate (there were only five ever made, come to think of it). 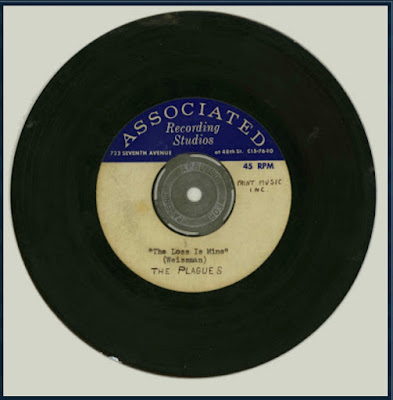 Allan also had the improved backing track we did for the proposed Ritchie Deane version. I don't think I'd ever heard it, except on the long-ago day we actually cut the thing, but here it is as well. A pretty dramatic re-arrangement, and despite our tender years we almost sound like studio pros, I think. Note, in particular, that the one-fingered lick at the end of my piano solo on the first take has been replaced by a more effective moving bass riff. 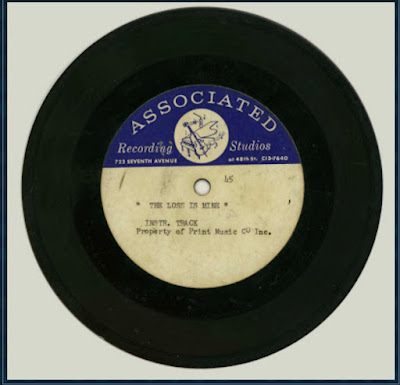 Two final postscripts, just for the (er) record, as it were.

I'm prejudiced, of course, but as somebody who's listened to countless garage tracks from the period -- and lord knows, there are enough CDs of mediocre Kinks/Stones/Raiders/Byrds knockoffs by 60s teens currently available -- I've got to say that I think "The Loss is Mine" is as good as any I've ever heard. And better than a lot of them, including some that were actually released. Maybe it's simply a question of us ripping off a not so usual suspect, but despite the shall we say naive lyrics, the song is genuinely hooky, the harmonies are damned slick, and that shift from minor to major at the end is undeniably effective. I also love my piano solo, even the one-fingered bit, but like I said I'm prejudiced.

And to give credit where credit is due, the lineup on both tracks is me (keyboards), Peter Frankel (guitar), Allan Weissman (bass) and Alan Silvestri (drums). (Silvestri, incidentally, is today the Oscar-nominated composer of the scores to every Robert Zemeckis film of the last gazillion years.) Vocals are by Allan, Pete and Larry Diehl (I lost track of Pete and Larry decades ago, so if anybody knows what happened to them....)

I should also add that Alan, Pete and Larry were all of 15 when we did the tracks; Allan and I were grizzled 17-year-olds.

Man, what a great story.

That you guys weren't even 18 yet is mind-blowing. I could definitely imagine hearing that on AM radio back in the day. Impressive.

this is a great story. Warren was involved on a few records with Stephen Schlaks, co-writer of the great "Your Maw Said You Cried in Your Sleep Last Night and the legendary Alice Wonder Land.