Covers Week Has Risen From the Grave! (Part Four): Something Sinister This Way Comes

From 1976, please enjoy The Fabulous Sheepskins... 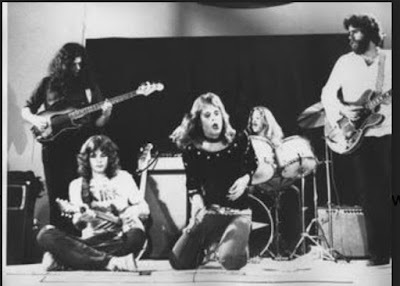 ...and the most deliberately creepy cover of a Herman's Hermits song ever heard by sentient mammalian ears.

The Sheepskins were a sort of Los Angeles glam-rock collective which featured a couple of rock critics and also friend of PowerPop Kirk Henry, whom attentive readers will recall as a member of cult band Christopher Milk. In any case, I'm not sure I prefer their version of "I'm Into Something Good" to the original, but I think it has a certain je ne sais quoi that truly says "I don't know what" and I definitely dig it.

Have a great weekend, everybody!
Posted by steve simels at 10:19 AM

I thought it was cool, not creepy. Very T. Rex.

As the late Arte Johnson would say...very interesting.

I'm not crazy about the vocal. Seems like the Sheepskins might be smirking while they recorded it. Also a little leaden.

The original wins in a landslide.

The project was called Sunset Boulevard, and apart from drums by Gordon Skene the Rhythm Machine and rhythm guitar by Outta Luck Mason Buck, it was all Jim Bickhart and Kirk Henry, but what's in a name anyhow.

Just for the record, Herman's Hermits' version was a cover of Earl-Jean's original. Earl-Jean was a member of the Cookies, who also recorded many KIng/Goffin songs.

Yes, fact, in keeping with that, we tried a female vocal first, but eventually were more amused by the male version.