I was never particularly a Cream fan, and Baker's drum style left me cold more or less from day one.

That said, these two Cream songs are on my Great Jukebox in the Sky in perpetuity. I would have cheerfully covered these in any band that deigned to have me as a member.

I should add that "Tennis," which I had as a single... 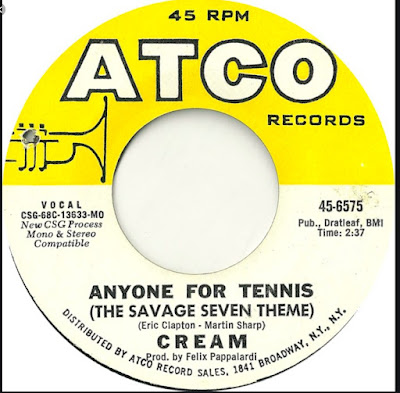 ...was actually the theme song for The Savage Seven, a really cheesy 1968 B-movie biker flick.

And the lyrics, by Clapton collaborator Martin Sharp, are absolutely fabulous.

Twice upon a time
In the valley of the tears
The auctioneer is bidding
For a box of fading years
And the elephants are dancing
On the graves of squealing mice
Anyone for tennis?
Wouldn't that be nice?

And the ice creams are all melting
On the streets of bloody beer
While the beggars stain the pavements
With fluorescent Christmas cheer
And the Bentley-driving guru
Is putting up his price
Anyone for tennis?
Wouldn't that be nice?

And the prophets in the boutiques
Give out messages of hope
With jingle bells and fairy tales
And blind providing scopes
And you can tell that all they're saying
Underneath the pretty lights
Anyone for tennis?
Wouldn't that be nice?

Yellow Buddhist monk is
Burning brightly at the zoo
You can bring a bowl of rice
And then a glass of water, too
And Fate is setting up the chessboard
While Death rolls out the dice
Anyone for tennis?
Wouldn't that be nice?

I should also add that in the rock-and-roll circles I liked to think I ran in, the whole idea of Ginger Baker was something of an insult at some point in the 70s.

As you can see by this actual Village Voice musicians classified ad for Bruce Springsteen's E-Street Band. 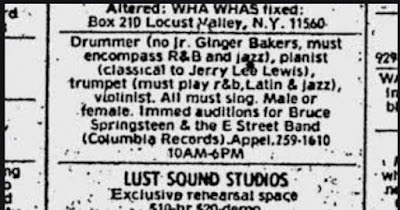 Finally, I should mention that word is that Baker was too obnoxious for Satan, to the point where he was just thrown out of Hell, and is now actually making an unholy racket in Heaven.

I'll have to part company with you on this one. Cream was and still is one of my all time favorite bands. I admit I am not as fond of the band's extended live jams as I was as a kid, but the studio stuff was and is killer.

Incidentally, whoever transcribed those lyrics got a lot of them wrong.

For example, it's obviously "And the street's a bloody bier". Not beer.

Also it's actually "And you can tell they're all the same/Underneath the pretty lies."

Baker invented the cliches and played them better than any of his many imitators. (I'm looking at you, Neil Peart.) Compare Toad with Moby Dick for starters. Clapton's pffft reaction when an interviewer suggested Bonham's musicianship was equal to Baker's is priceless. Air Force? Vastly underrated and the trippiest live act ever I can attest from personal experience. He was terrible in the Cream Reunion - arthritis - and great in that trio with Bill Frisell and Charlie Haden. And the Springsteen ad isn't a putdown. It says no "junior" Ginger Bakers.

You may be right about the Springsteen ad, Pete, but at the time -- and I vividly remember seeing that when it first appeared -- I not only took it as a dig but laughed my ass off.

Q: What’s the difference between Ginger Baker and a podiatrist?
A: A podiatrist bucks up your feet!

I kid, I kid...mostly. I was never a fan of his drumming even remotely the way I was a fan of Keith Moon’s drumming (or that of Joe Vitale, who was the drummer for most of Joe Walsh’s ‘70s and ‘80s work). And Cream I like mostly for Clapton’s guitar work (and agree with you about “Badge”; I’d love to play that one live with a band someday). And supposedly a big reason Blind Faith broke up was Clapton wanting to get away from Baker, which robbed us of more Clapton/Winwood collaboration - a bad outcome in my book.

But I like enough of Baker’s stuff with Cream and Blind Faith to dial up “White Room” and “Had To Cry Today” when I read the news.