So as attentive readers may recall, I'm in the process of readying a solo single -- yeah, right, I know; the masses have been clamoring for that -- the a-side of which is a remake of this amazing Byrds' anti-war folk-rock classic from 1966.

But what I myself didn't recall is that a very interesting but obscure American band of the 60s had already done a cover of it in -- dig this -- the style of The Yardbirds. And that I had posted about it here a decade ago. 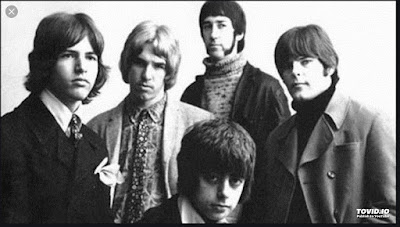 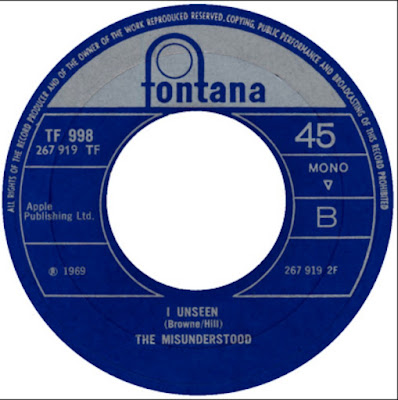 The Byrds track is one of my favorite things ever (David Crosby's out-of-the-blue harmony line on the last verse is devastating, I think), but their version (courtesy of Pete Seeger) appropriates the melody of an old Celtic folk song called "The Silkie." The lyrics to both versions, however, are based on a translation of a poem by Turkish writer Nazim Hikmet.

In any case, The Misunderstood's radical re-imagining of it -- as you can hear, it sounds almost Middle Eastern -- really does suggest that these guys could have been a major band if the fates (including the Vietnam War era draft, ironically enough) hadn't intervened.

The short version: The Misunderstood were a Brit Invasion-inspired California garage band with all the usual influences. Then they added a steel guitar player(!), got discovered by the guy who would become British deejay John Peel, moved to England, got signed, and impressed people as being innovators in a league with the aforementioned Yardbirds and Pink Floyd despite the fact that none of their singles sold. Eventually, one of them got called up by Uncle Sam and the whole thing kind of fell apart by early '67.

Most of the rest of their recorded output from that period is equally if not more impressive, IMHO. On the other hand, I'm not sure their failure to break through commercially was simply a matter of bad luck -- their original songs (to my ears) lack that certain something, despite the performances being tremendously imaginative and accomplished.

Still, they seem to be one of the more tantalizing Might Have Been stories from the period, and it's kind of wondrous that you can still stumble across stuff like this unawares.

POSTSCRIPT: I should add that there's a really terrific compilation of their studio work available over at Amazon HERE.

Plus, you can read a very entertaining band history by Ritchie Unterberger over HERE.

Also: Misunderstood pedal steel monster Glen Ross Campbell went on to play with UK blues-bashers Juicy Lucy for a while and also did a stint in Joe Cocker's backup band. He later moved to New Zealand where he is still active in music.
Posted by steve simels at 8:26 AM

Going by the one track you posted, they sound like just another garage band, fun but nothing special.

I'm not being a wise guy just saying what my ears hear.