Common My Ass. These Guys Are Totally UNCommon!

So as some of you may recall, back in 2018, I was at the Keuka Kafe, my local watering hole down the street (Queens Boulevard, or what the locals call Le Boulevard de la Mort) from a certain Shady Dame's home in Forest Hills. BTW, if you're ever in the neighborhood stop by, say hi, and order something refreshing from their spectacular wine list. 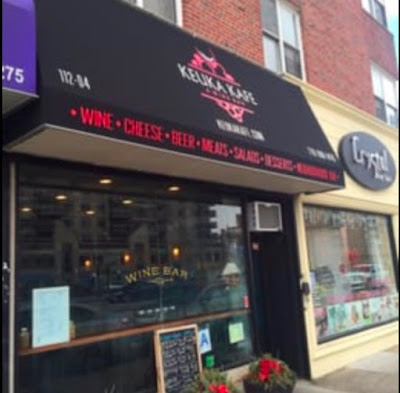 In any event, here's the short version of the story as I posted it at the time.

So the other week there was a sort of youngish hipster guy at the bar. I engage in this perhaps unfair cultural stereotyping because there were few such folks in the neighborhood when we moved in four years ago, but their numbers are increasing, and this usually presages the opening of better restaurants, which would be a good thing. I gleaned from his overheard conversation that he was in Forest Hills killing time because a connecting flight (from La Guardia to Bumfuck Somewhere) had been cancelled and a Google search turned up the fact that the Keuka Kafe might be an agreeable place to wile away several hours while waiting for the next plane out.

We got to talking; I asked him whether he was traveling for business or pleasure, and he let it drop that he was a rock musician in the midst of a brief tour. I allowed how isn't stardom wonderful, and eventually, after I got over my surprise at the encounter I asked him if I had heard of his band.

I hadn't, but I have now. Ladies and germs, let's give it up for my new pal Clinton Clegg, lead singer of the fabulous Pittsburgh-based neo-soul revival band The Commonheart.


And to facilitate that giving it up, here are three performances they did over the weekend on the CBS morning show.

Jeebus, those guys are good. More important, can somebody please explain to me why with non-major label music this memorable available on your teevee, why is it that whoever books the acts on Saturday Night Live continues to foist the worst crap imaginable on us?

Oh well. Meanwhile you can find out more about Clinton and the band over at their website HERE, including a way to order their fabulous new CD Pressure.
Posted by steve simels at 8:09 AM

Wow, thanks for the plug! I remember that guy! I cooked for him!

As for why bands like The Commonheart aren't on Saturday Night Live, look at the differences between the audiences of SNL and CBS Sunday Morning. Sure, there's some overlap, but I'd guess the overlap trends to over 65s. And without getting too general about this, it may take a little bit of long-developed personal taste and a little bit of free time to enjoy such music as that made by The Commonheart.

And speaking of wine, a great wine reference appeared on Sunday night's Bob's Burgers. The mom on the series, Linda, attends a book reading of her favorite mystery writer, an author who specializes in mysteries set in the world of fine wines. Linda points out to her husband, Bob that she recently read the author's last book, Death Cabernet For Cutie.