Stereo Mixes of the Gods (An Occasional Series): Special "I Left My Heart in San Francisco" Edition 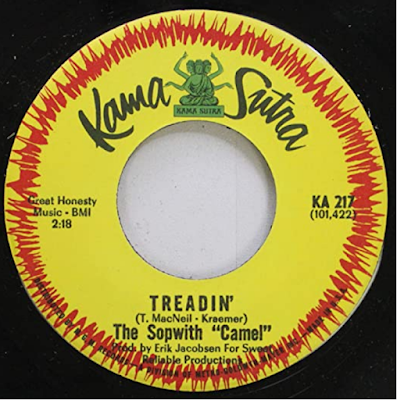 I bring this up for a number of reasons, but the main one is that said song has never appeared in stereo anywhere to my knowledge, including every previous CD reissue of the Camel's original album., of which there have been several, both domestic and imported. I don't know the provenance of that, but as Cristina Applegate famously said on Married With Children, you could have knocked me over with the weather when I discovered it on YouTube quite by accident over last weekend. I have literally been waiting 53 years to hear it, and I'd say I can finally die happy except that I have no intention of shuffling off this mortal coil any time soon, or at least till I hear some other heretofore unknown to me stereo versions of records I fetishize (a subject for another posting).

A brief historical note: As you can hear, "Treadin'" is quite a little masterpiece of its era -- those classically influenced guitars on the instrumental break just blow me away -- but the Camel, as I said up top, is one of the most criminally overlooked bands ever, important both historically and musically. Short version: They were the first underground San Francisco band (they were huge on the ballroom circuit, right up there with the Airplane, the Dead, et al) to score a Top 40 hit (the aforementioned "Hello Hello").

I should add that the aforementioned "Hello Hello"...

...was also the first Top 40 rock hit featuring a bass solo, let alone a great one.

I should also add that their follow up single -- which actually was a minor radio hit -- is another folk-rock masterpiece. Seriously, if this doesn't make you swoon check your meds.

Okay, I'm obviously a little obsessive on this subject, so I will simply close with this live version of "Hello Hello,' from 2011, featuring the Camel's great lead singer Peter Kraemer (or as I like to refer to him, the sardonic sounding American version of Colin Blunstone).

Damn, I would kill to be as cool as that guy at his age.

More hump related stuff tomorrow. Hey, like I said -- I'm getting obsessive on this subject.

I bought the Sopwith Camel lp way back when in the cutout bin as I always loved Hello, Hello and Postcard from Jamaica (heard them both on the radio in Cleveland - even remember hearing them do a live interview on WHK). "Frantic Desolation" is my favorite track from the lp.
I played a couple tracks from Miraculous Hump Returns from the Moon on my college radio show - don't recall which ones.

I think we should all be grateful for Erik Jacobsen.

Funny you should mention Erik Jacobsen.

A good friend of mine lives in the same building as Joe Butler of the Lovin Spoonful, and when I was researching the Camel piece I wondered what had become of EJ. She asked Joe, and I was happy to hear that although he has some health issues, he is still alive and well and living in California.

MJConroy mentions The Miraculous Hump Returns From The Moon, a wonderful album that I owned on LP and currently on CD. In 1973, I saw Sopwith Camel at the old Bitter End, on tour to promote Miraculous Hump. I remember getting there early with two friends to meet the band members, and while we were waiting, Peter Kraemer roller-skates (?) in. He was anything but a star. There's a well-written NYT review of the show at https://www.nytimes.com/1973/09/28/archives/article-1-no-title-pop-music-hello-camel-bobby-short-gives-gershwin.html, though you may need a login and pw to see this archival piece.

Camel Sutra?
Looks like u found who helped most inspired Modest....

Susan Cowsill did a spirited cover of "Hello, Hello" on her family's one live album. She was about ten at the time. She's sixty now!