Your Thursday Moment of Speaking of Gorgeous

[I originally posted this back in 2017, but I had forgotten how great the song in question is until I stumbled across it in my iTunes library the other day, so I thought I'd repost. Thanks for indulging me. -- S.S.]
This is an oh so tragic story, so please try not to laugh.

A long time ago (no Spanish American War jokes, thank you) I was going through a really painful breakup, by which I mean I was at the beginning of a three year depression that made me all but impossible to hang out with because of my annoying habit of saying things like "What's there to live for?" in response to questions like "Would you like fries with that?"

As you can imagine, my emotional state was impacting my listening habits, and at one point the then new 1991 album Anything Can Happen, by Nashville alt-pop rockers The Questionnaires, happened to cross my desk. 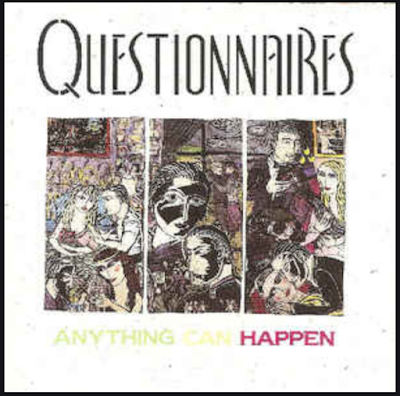 -- hit me pretty hard and I began listening to it obsessively, to the point where I think I basically ignored everything else on the record, the rest of which could have been Lithuanian grindcore for all I knew.

Anyway, one day a critical colleague of mine -- toiling at Entertainment Weekly, as I recall -- happened to ask me what I was listening to of late, and I recommended said Questionnaires album, rather heartily, as I also recall. A few weeks later he called me up about a review assignment, and he finally said "Uh...Steve? You know that Questionnaires thing you made me listen to? It...really sucks."

To be honest, I didn't see the point in arguing, and I'm sure I figured that my own judgement probably wasn't all that reliable anymore, for obvious reasons. So I put the CD away out of earshot, and eventually mislaid it somewhere, probably while moving to a new apartment a year or two later.

Cut to the present and, for whatever reason the song popped into my head unbidden. So out of curiosity, I went through my iTunes library and checked out "In the Back of My Mind" for the first time in at least two decades. And guess what -- I still think that it's ragingly beautiful in a sort of Brian Wilson/early Association/lotsa harmonies kind of way.

Okay, no larger point, but you can listen to it above and make up your own mind about whether or not I'm the biggest pathetic wimp who ever lived.

Incidentally, the guy who wrote the song is big band jazz great Woody Herman's grandson. What Woody would have thought about any of this, of course, is anybody's guess.

POSTSCRIPT: You can get a brand new copy of the Questionnaires CD -- which I just listened to for the first time in years, and which is really really good -- at Amazon, for a lousy six bucks, over HERE.

They kind of had me, then the "ba ba's" kicked in.

Went back and tried them again. Nope, still couldn't get through them. If Greg, Peter, and Bobby Brady formed a band, I imagine they'd have done more than their share of ba-ba's. Sorry.

Not bad, but The Beach Boys song with the same title is light years better.

I have two break-up songs that mean something to me. One's Walk Away by Joe Walsh-era James Gang. Oh, Rosanne, wherefore art thou? The other's John The Baptist from John and Beverly Martin's Stormbringer. Oh Salome, how many heads, and how many silver plates?