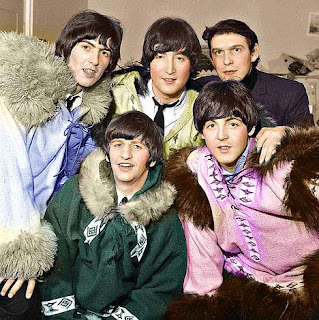 The man who could probably have the most legitimate claim to being the Fifth Beatle has passed away.

Neil Aspinall, a longtime friend of the Beatles who managed their business enterprises and helped make the group a moneymaking phenomenon decades after they split up, has died. He was 66.

Aspinall's death was announced Monday in a statement from surviving Beatles Paul McCartney and Ringo Starr, the widows of John Lennon and George Harrison, and the band's Apple Corps Ltd. company.

Aspinall died at Memorial Sloan-Kettering Cancer Center in New York City, where he had been receiving treatment for lung cancer, Sunday night, according to Geoff Baker, who formerly represented both Aspinall and Apple Corps.

Aspinall's wife and five children were by his side; McCartney visited him before his death.

He was a childhood friend of McCartney and Harrison in Liverpool, England. While he didn't contribute musically, he played several key roles in support of the Beatles, most notably as the head of their Apple Corps business, which oversaw the commercial concerns of the group, including licensing.

Hey, thanks for the "hat tip"! Wish it were for happier circumstances...

This follows on the heels of Norman Smith's passing back on March 4. Smith was the recording engineer on duty when the Beatles came into EMI studios for their first sound test, in 1962, and stayed through Rubber Soul.

He then went on to produce the first 2 Pink Floyd albums...and had a hit of his own as Hurricane Smith with "Oh Babe What Would You Say".

Didn't see much notice of his passing, but he did apparently play a large part in the big, dry, live sound of the early Fab recordings.

Sad news. By all accounts a terrific guy....

In fact, he did contribute musically-- as a member of the chorus on "Yellow Submarine" and playing percussion on the "Magical Mystery Tour" and Harrison's "All Things Must Pass" albums.

That picture is actually hilarious.

Seems to be from more or less the same period as the Butcher Baby cover. I.e., look at their eyes...

They are all incredibly stoned and have been up for days, Lennon in particular..
:-)