And proving yet again that YouTube is the greatest thing since the Library at Alexandria, from 1966 please enjoy a television interview -- whose existence was heretofore not even suspected by yours truly -- with the late great Zal Yanovsky, then of the Lovin Spoonful.

This dates from the heyday of the band's pop stardom, some months before the drug bust unpleasantness that essentially ended their career (at least as far as the hippies were concerned). In any case, I had never heard Zally speak before, so it's nice to know that apart from looking every inch the rock star as he does here, he was also as endearing and funny as he's been advertized.

And because I love all of you more than food, from 1968, here's Zally's wonderful cover of Floyd Cramer's piano instrumental "Last Date," which is as nice an example of Zally's country-inflected guitar style as you're ever gonna hear.

From his sole (alas) solo album, of course, which remains one of the great one-off masterpieces of 60s rock. 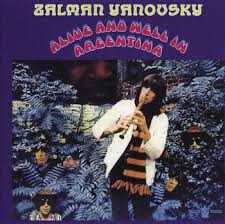 Oh, and speaking of memorable 60s supporting players, you're not gonna believe who I'm gonna post -- in a live clip, stomping his way through an Elvis Costello song -- on the morrow.

I've always thought he played with great charm. Thanks for "Last Date". I'll keep an eye out for the rest.

I remember seeing this on the TeeVee live. (I'm old). I am ahuge Zal fan and have the ElPee on vinyl. PS: love your page.