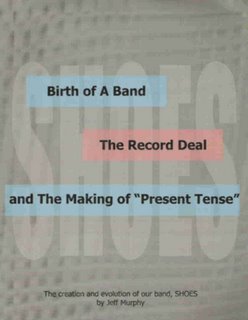 I recently received Jeff Murphy's new book Birth of a Band, the Record Deal, and the Making of "Present Tense." Now, regular readers know that I am obsessed with this band, though not in an unhealthy, costume-wearing sort of way. And so, with one thing and another, I've done a fair amount of reading over the years about the Present Tense sessions and what happened there. I've also got a spotty email acquaintanceship with Murphy himself, so I've seen some of these stories before.

But it's nice to have them collected between two covers.

Shoes are that most unusual of bands, a group of friends who just decided to play together. Beloved by critics and music afficianados, they were perhaps the worst-marketed band on the planet. For example: when Present Tense was released in 1979, Elektra released FOUR--count them, four--singles in six weeks. Three of them had the same B-side. I would love to know what marketing genius came up with that plan.

Similarly, as Murphy notes here, the same four tunes were made into not-very-good videos in 1979. When MTV premiered, they were nonetheless placed in heavy rotation, because there was fuck-all else to play. But this created a slight resurgence which Shoes, who were just finishing their second album, Tongue Twister, could have capitalized on easily with new, better videos. In other words, the world was reminded just how good PT had been in the days before TT came out. But Elektra assured them that MTV was "a flash in the pan," and was not forthcoming with any more money for videos, which were becoming increasingly sophisticated and expensive.

It's a goddamn crime.

In any case, if you're a Shoes fan, you'll like this book. There's some nice rare photos and great stories (including the full story about how Richard Branson tried to kill Skip Meyer), and for the real wonky musician types, some discussion about guitars and effects and techniques. (My favorite was the amp-in-the-loo, but your mileage may vary.) It appears to be a complete DIY operation: in my humble opinion, Murphy could have used a good proofreader, but then I tend to obsess about that sort of thing. I'd also like to see some reflections from John and Gary about the issues Jeff outlines here, but hey, a girl can't have everything.

Order Birth of a Band, the Record Deal, and the Making of "Present Tense." here.

Powerpopulist has more.
Posted by NYMary at 3:00 PM

Hey, I believe that same thing sunk Moby Grape - some knucklehead at Columbia decided to release FIVE singles at one time, and the DJs where confused about which to play, so they ALL fizzled.

Now, regular readers know that I am obsessed with this band, though not in an unhealthy, costume-wearing sort of way.


I don't want to accuse you of lying or anything...

It's a comedy site, for the most part.

Oh, I do not either have Shoes costumes, Kenosha. They didn't wear stocking caps.

That was the Monkees.

This should be an entertaining read. I interviewed Jeff Murphy 10 years ago for a (relatively speaking) long article on Shoes for Audities (online only). Gosh, NYMary was only 240 years old at the time, so she should have some knowledge of it; it was on a handful of sites back in the day, though it has seemed to have been lost in the ether - or the Luddites wiped it off the face of the planet. At the time, Jeff thought it was the best chronicle of the early history of the band. (Yeah, like so many were writing about Shoes.) I guess that isn't the case now.

Had forgotten about Shoes until I recently bought "Best Of" from Napster. Man, I would think any EMO band today could get some ideas from these guys. Their songs are so catchy. I think if you played this stuff on the radio today, noone would know that it is 25 year old music. Incredible for guys who didn't know how to play when they started. In my drunken revalry Christmas day, I went to the Shoes web site, sent an e-mail and actually got an e-mail back from Jeff Murphy today. Wish I would have gone to see them when I lived in Waukegan.