Those Lost at Sea and Never Found: A Review 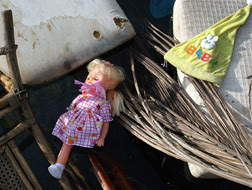 All you need to know, really.

So I'm watching this HBO docudrama, Tsunami: The Aftermath. Now I know a bit about this subject. It's part of my broader interest in Southeast Asia, I've worked with relief organizations, and it really is just an interesting topic. I've watched a number of films about the disaster of 26 December 2004, and am currently trying to write a presentation to explain the tsunami to kids without scaring the shit out of them. That ought to be a challenge.

So I guess I'm coming at this from a bit of a different direction than your average viewer. But still...

I guess we all have our pet peeves: mine is what I call The Heart of Darkness Syndrome. There are two kinds of colonial texts: one focuses on the tragedies of colonialism on the native population via the experiences of the indigenous peoples themselves, the other focuses on a Westerner, changed by the colonial experience, just sort of watching the tragedy unfold in front of him.* In this latter form, indigenous peoples are set dressing, like the groaning forms in Conrad: they're there, but this is the story of two white guys, and don't you forget it.

"They were dying slowly--it was very clear. They were not enemies, they were not criminals, they were nothing earthly now-- nothing but black shadows of disease and starvation, lying confusedly in the greenish gloom. Brought from all the recesses of the coast in all the legality of time contracts, lost in uncongenial surroundings, fed on unfamiliar food, they sickened, became inefficient, and were then allowed to crawl away and rest. These moribund shapes were free as air--and nearly as thin. I began to distinguish the gleam of the eyes under the trees. Then, glancing down, I saw a face near my hand. The black bones reclined at full length with one shoulder against the tree, and slowly the eyelids rose and the sunken eyes looked up at me, enormous and vacant, a kind of blind, white flicker in the depths of the orbs, which died out slowly. The man seemed young-- almost a boy--but you know with them it's hard to tell. I found nothing else to do but to offer him one of my good Swede's ship's biscuits I had in my pocket. The fingers closed slowly on it and held--there was no other movement and no other glance. He had tied a bit of white worsted round his neck--Why? Where did he get it? Was it a badge--an ornament--a charm-- a propitiatory act? Was there any idea at all connected with it? It looked startling round his black neck, this bit of white thread from beyond the seas.

In Tsunami: The Aftermath, the quarter million or so dead and missing South and Southeast Asians are reduced to a waiter helping Europeans find each other, some mean cops, and a helpful photographer/cultural guide in the mode of The Year of Living Dangerously or The Killing Fields. I sort of knew I was in trouble when I saw that the film was set at a fictional resort in Thailand: Thailand got a lot more coverage than some places harder hit, because of the resorts and the large number of Westerners there. But its casualties were relatively modest, comparatively speaking. For every person dead or missing in Thailand, 30 were dead or missing in Indonesia. But, you know, they didn't snorkel or speak English, so who cares? 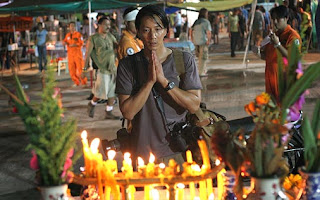 There is one point, in episode two, where the Thai photographer rails at Tim Roth for sending a picture of a dead body to the wire services. "Even though you come here for holidays and you drop your tabs on the beach, and love the food, yeah? ... It'll slide us right back into the Third World, and that's fine for you. You're not Thai." But it's a brief reminder of whose tragedy this is in a sea of European faces, and even that is couched in what is--according to the structure of the film--some wacky Buddhist idea that burning bodies is okay. And it's the Western bodies which are in question anyway.

This was a horrible, an almost unimaginable, humanitarian crisis. But it was not primarily a crisis of people on vacation.

If you have to buy a gift for the person who has everything, consider donating money to these people in their name: they do great work.

*Pretty much always "him," though you do have your Beyond Rangoons and such for balance.
Posted by NYMary at 6:01 AM

Molly, bingo! I watched the beginning of it, and that was my thought exactly. Once again, it is the ethnocentric interpretation of the tragedy.

Although yes, the Thai photographer was very easy on the eyes, but I had to leave when the "noble savage" waiter found his dead grandmother.

I have seen this in countless movies which then go around the world as a representative of US 'values'. Somehow we need the white face in the story to be able to connect and it is embarrassing.

That's why Bollywood and Chinese films, along with all the other non-Hollywood companies are so good for us. We suddenly are put into the minority role and watch the plot unfold without the all-knowing wise American solving all the problems. We even learn that them ferringers love their children, feel lust, have good values, have evil people, hate, laugh, govern, all without us.

These articles are fantastic; the information you show us is interesting for everybody and is really good written. It’s just great!! Do you want to know something more? Read it...:Great investment opportunity in Costa Rica: condo costa estate real rica, condo costa rica, condos for sale in costa rica. Visit us for more info at: http://www.jaco-bay.com/