Usually, it's steve who gets to do the movie reviews around here. He's a pro, and has far more cred and scope than I.

But he's right about this one.

I went to see Across the Universe at our second-run theater last night. We don't get to the movies often, and even less often do I get to choose (I still can't believe he talked me into getting drunk and seeing The DaVinci Code)--so this was a treat for me. But I'm still not wholly convinced it was a good idea.

When it works, it works splendidly: superhuge American soldiers in underpants and Army boots dragging a massive Statue of Liberty across a lilliputian Southeast Asia ("She's So Heavy"--fucking brilliant), "Let It Be" as a biracial funeral dirge. And when it doesn't, it doesn't. Bono sucks a lot, and who could have predicted that the fabulous Eddie Izzard would turn out to be this generation's Rex Harrison, relentlessly refusing to sing in a movie where everyone sings? And how is it they kept Jim Broadbent out of this production?

And then there is The Boy. 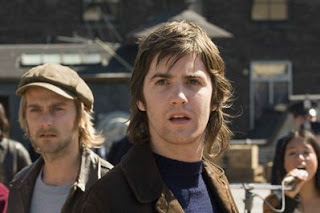 I have to tell you: I'm old and matronly and have four beautiful kids. It's not like I'm a twelve year old girl getting all misty over Wayne Gretzky and Shoes. But wow. This guy (Jim Sturgess, imdb tells me) is an unholy sex-soaked combo of a young Paul McCartney, Liam Gallagher at his sloppy best, and Joachim Phoenix as Johnny Cash, with just a dash of a Velvet Goldmine-y Jonathan Rhys Meyers to make him especially dangerous. He's a glorious mess. (As Thers noted on the way out, "you do like them disshevelled.") I don't think I've been this wowed since I first laid eyes on Ewan McGregor.

Is there anything more unseemly than an elderly lady with a crush on a pop star? No, so I'll let it rest. I have records older than this guy.

In many ways, the movie is too much of everything, like consuming an entire chocolate cake and washing it down with full-fat egg nog. But in smaller bites it might be less overwhelming. I thought a lot about the central conceit: the use of Beatles' songs as a freewheeling soundtrack to the sixties, and I'm still not sure it entirely works. But it's bold and interesting and not like any movie I've seen in a long time.

UPDATE: Thers didn't like it as well as I, but then he didn't have The Boy to distract him.
Posted by NYMary at 5:17 AM

well, I'm glad, here in the cold pre-dawn, that you've switched from washing that cake down with Baileys! Now THAT was unseemly...

After watching four or five clips, I'd have to toss a little unspecified, yet highly appealing, whiff of baby dyke into that Sturgess -teh hawt -combo.

I'd have to toss a little unspecified, yet highly appealing, whiff of baby dyke into that Sturgess -teh hawt -combo.

I'll take that as a friendly amendment.

I really want to go see this!

Two segments especially stuck out for me: first, the "She's So Heavy" one you mentioned. Second, "Because." It was exquisite. ERW singing "If I Fell" was pretty great, too.

Oh, and by the way -- thanks for not liking Eddie Izzard. I thought I was the only person who noticed that apparently he didn't get the memo explaining what the movie was about...

Agree completely. Sturgess was the best thing about Across the Universe and Izzard and Bono --yechh.