Okay, here's another obviously self-indulgent installment of the on-going Project to Digitize Every Loud Noise I Ever Made in the Time Remaining Before My Death.

And this is the short version, BTW.

In June of 1970 I was getting some extra credits toward my B.A. in a summer theater program at what I usually refer to as An Unidentified College on Long Island. One of the pieces we were doing that month was a tragically avant-garde 1967 one-act called Melodrama Play by the then not-a-household-word Sam Shepard. The work itself, which I barely remember at this point (many drugs were being consumed that summer) concerned a Jaggeresque rock star, his twin brother, an unscrupulous manager and (I think) a murder of some sort. I got cast as the rock star, which is funny on any number of levels, especially considering that I looked like this; Jaggeresque really isn't the word that comes to mind. 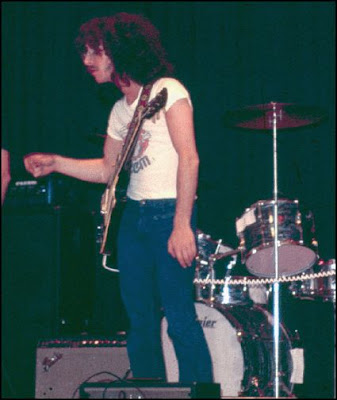 Anyway, a song by the show's fictional rock star, entitled "Prisoners Get Out of Your Homemade Beds," figured prominently in the script; Shepard had provided shall we say idiosyncratic lyrics, but the music was apparently up to whoever decided to mount a production. The day we started rehearsals, the director (one of my profs) took me aside and said "Come up with a tune for for this. I've got two hours booked in the college radio station on Thursday, and you'll record it then." Considering I had never written a song in my life (nor have I since) this was rather a daunting challenge, as you can well imagine.

Fortunately, The Who's Live at Leeds album had come out a few weeks earlier, and I had been listening to it obsessively; using that as a template, it turned out to be surprisingly easy to come up with a stupid riff and a moronic three chord instrumental track that sort of fit Shepard's somewhat wayward words. Two of my musician friends from my garage band at home -- including my old pal Allan Weissman, who you may recall from this installment -- happened to be available, and so, with me doing a woefully inadequate imitation of Pete Townshend on guitar, we eventually found ourselves at the recording facilities of WCWP-FM, bashing out the tune in about as much time as it took to rehearse it once. As I recall, the engineer simply hung a single microphone in the vicinity of the band; there was no overdubbing, obviously. The finished product, however, met with the director's approval, and I wound up yowling to it on stage when we did the show a week or two later.

Cut to: sometime last January. I was reminiscing about all this with another old pal, and he let it drop that years back I had entrusted the original reel-to-reel tape of the song (the only one that ever existed) to him, and that against all the odds he still had it. And still playable, apparently.

So -- at great personal expense (actually, fifty bucks to a good engineer I know), here it is these four decades later, in mp3 form for all to hear. I also found Shepard's lyrics, which I have appended; feel free to sing them in the privacy of your own home, preferably while playing air guitar. You'll notice three strategically placed screams throughout the clip -- those are your cues for the beginning of each verse.

I should add that a version of this track with a vocal by yours truly has survived as well, but it will be available for public audition at approximately the same time that frozen yogurt goes on sale in Hell. 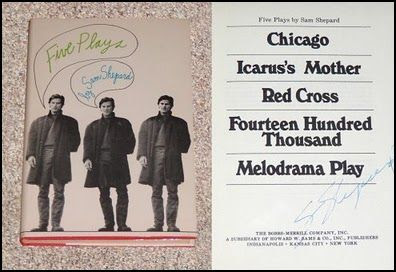 "Prisoners, Get Out of Your Homemade Beds"

I must confess, cheesy as the track is, I still kind of dig the blatant steal from The Kinks at the end.
Posted by steve simels at 12:00 AM

Pretty cool Steve, was that a Les Paul you're playing in the picture? The song has a little Won't Get Fooled Again feel to it. Couldn't hear the vocals though, just the screams. Maybe I have to turn it up, don't wanna wake the wife, it's 1:am.

Frank -- Yeah, a gorgeous 1959 Les Paul goldtop with ceramic pickups which I foolishly had painted black because I thought it looked cooler.

Don't even get me started on what it would be worth today if I hadn't sold it for rent money in 1976,,,,

stevie - that Paul is cool.

Was that a Creem t-shirt you had on?

Yes, that was a Creem shirt, and if memory serves that was probably the last time I felt thin enough to wear a white T-shirt tucked into my jeans.
:-)

Okay, I'm just gonna say this: I love this riff. There, it's out there, and I'm not sorry. I was humming it all the way into work this morning.

And steve, is this what you looked like when you were necking with that girl and the guy came into the dorm all excited because he'd seen two chicks making out?

And it is a cool riff.

The song is going somewhere with a good forward momentum. It is a toe tapper for certain. I had in my mind that you were a bassist, but that was some good guitar. It is easy to bang away a guitar with friends, but a recording has a way of exhibiting all the problems that enthusiasm will hide.

But now, what genre do I put this under in my iPod?

Pretty much, yeah. I'm not sure about the mustache, though...

With the gangster lean....

I'm sworn to secrecy but oh the stories I could tell!