Tales of the Ignoble Frog: The Last (Swear to God) Entry!

Two final French-related thoughts(?) that have nothing to do with music. Sorry, I just couldn't resist.

The first is...this car. Saw it parked near our hotel last year and couldn't believe it was real, so we looked for it last week and sure enough it was in a space down the street. I'm informed it's a 2008 Fiat "Runt." 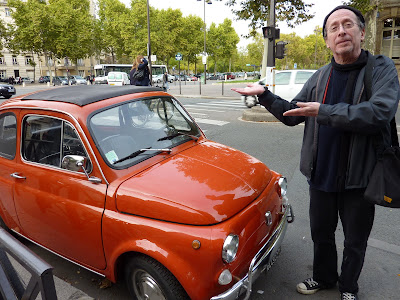 Seriously, this photo is not retouched or altered in any way. The car actually is that small. And believe it or not, it's a four-seater (albeit one that's literally the width of an umbrella that was lying on the back seat).

I'm also crazy about this place, which we stumbled across while walking around the first day in town. At first, I wasn't quite sure what it was... 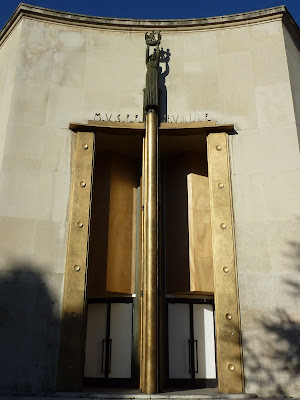 ...although for some reason it instantly reminded me of this great set from the 1960 version of The Time Machine. 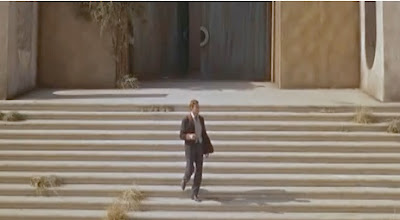 Turns out it's the quite famous La Museum de la Ville, home of one of the primo modern art collections in the world; it was actually hosting a big Basquiat retropsective the week we were there, although we didn't have the time to check it out.

But when I Wiki'd the place I found this, which just slays me.

On 20 May 2010, the museum reported the overnight theft of five paintings from its collection. The paintings taken were The Pigeon with the Peas by Pablo Picasso, La Pastorale by Henri Matisse, Olive Tree near Estaque by Georges Braque, Woman with a Fan by Amedeo Modigliani and Still Life with Chandeliers by Fernand Léger. Total value of the purloined paintings is estimated at €100 million.

The French auctioneer and president of the Association du Palais de Tokyo, Pierre Cornette de Saint-Cyr, commented "These five paintings are un-sellable, so thieves, sirs, you are imbeciles, now return them."

Can't you just hear the guy saying that with an outrageous Monty Python French accent?
Posted by steve simels at 8:14 AM

That looks like a concept car I saw a few years back. I don't know if they ever went into production. I believe it was called a "Figaro".

Dayton isn't the only place that has those tiny autos. We see them in the Bay Area all the time - they're called "Smart" cars, though these don't have 4 seats, just 2. My wife loves 'em!

Fiat has a new teeny model for the US in the works, to go against the Mini Cooper, which is what the Runt reminds me of, though I doubt it'll have that timeless design.

The car is a Fiat 500. (http://en.wikipedia.org/wiki/Fiat_500) That particular model was sold from the '50s into the '70s, but they have a new version on sale now in Europe, and coming soon to the US.

The Figaro was a Nissan model, sold only in Japan in the early '90s.