Wednesday Essay Question: Mick Taylor -- Greatest Rock Guitarist of All Time or What?

Just a little postscript, as it were, to our Rolling Stones discussion of the other week. Here's the best sounding version I've ever heard of "Travelin' Man," a studio outtake from sometime circa Sticky Fingers or Exile, which is mostly Taylor's show. And a rather jaw-dropping one, in point of fact. 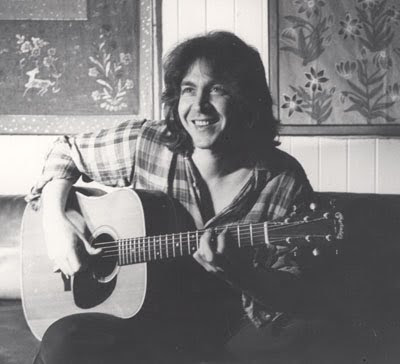 As you can hear, the song is really nothing more than a three-chord vamp, and Taylor is essentially noodling over the course of it. And yet by the time the track nears the six minute mark, he still hasn't run out of ideas.

I think what I'm saying is that I'd kill to be able to play even a fraction of the licks he tosses off here so blithely.
Posted by steve simels at 12:17 AM

The Mick Taylor story is really sad, mostly for us fans.

As much as I enjoy Ronnie being in the band imagine if Mick Taylor hadn't walked out but had remained in the Stones for the past 35 years. Music history rewritten?

I had the pleasure of singing for Mick Taylor's band a few years back.

It was short-lived, of course.

My DC-area group was booked to open for Mick at a DC club. When we arrived for our soundcheck, he was in the middle of his. Sans vocalist.

And he wanted to do a number with vocals, and check that PA out.

So he asked me to sing with the band. Which I found very cool.

For the life of me, I don't remember the song. But whatever it was, I knew it.

He was very gracious, which I did not expect.

I enjoy Ron as a Stones guitarist, he has the Stones attitude to be sure, but Mick is really something. It is not like he is playing licks, he is playing a counter melody. An improvised counter melody at that. What a fine musician. And "Time Waits For No One" is just killer. Another great song for my iPod!

That's an amazing story -- especially the part about not remembering what song you sang.
I'd have been a little overwhelmed by the whole thing too.

That is soooooooo cool.
:-)

He's an amazing guitarist, and one of the few guys around who can actually play slide in standard tuning. Last I heard he was having some health problems. Hope he's doing better these days.

Real nice tone, too - sounds like a Gibson/Marshall combo but who knows.
He's obviously enjoying himself. Gotta wonder how ugly the personal side of the band was, to prompt him to walk away from a rhythm section like that.

Also, when you write or help write songs and the band steals them because they are the Stones, it is time waits for no one to leave time.

'Time Waits For No One' is a great solo.