Well, it's Friday and you know what that means. Actually, in this case, it means you guys already know I'm in Paris on vacation at the moment, so there's no point in trying to fool you with another lame joke about me and my Oriental [insert smutty job description here] Fah Lo Suee and I heading off to the palatial estate of some rightwing shithead du jour.

That being the case, let's head directly to the Listomania, which was inspired by Mad Men creator Matthew Weiner's use of Sonny and Cher's "I Got You Babe" to great ironic effect at the conclusion of last week's season finale. I say ironic because somehow I just don't think Don Draper is a Sonny and Cher fan, although that not-to-be-trusted manipulating phony of a secretary he just married just might be.

In any case, and since I'll be too busy eating stinky cheeses and hanging out at dimly lit bistros with black-clad existentialists who look even stupider in berets than I do to post anything around here anytime soon, here's a hopefully fun little project to help us wile the way the hours until Monday:

Previously Existing Post-1953 Pop, Rock or Soul Record That Took On an Either Wonderful or Utterly Heinous New Meaning Thanks To Its Use in a Film, TV Show or Commercial!!!!

6. Van Morrison's "Into the Mystic" as heard in Dusty and Sweets McGee 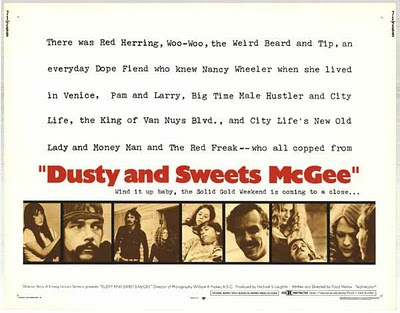 Two sad and mournful junkies shoot up to the strains of Van the Man's ode to spiritual and romantic transcendence in Floyd Mutrux's brilliant semi-documentary. Trust me -- once you've seen the scene, you'll never be able to hear the song without thinking of it.

A video that does complete justice to a great record. How many exemplars of the genre can you make the same claim for?

4. Nilsson's "Jump Into the Fire" as heard in Martin Scorsese's Goodfellas

Along with snippets of "Memo From Turner," "Magic Bus," et al. I defy anybody to watch this scene without feeling they're wired out of their skull on the most primo Peruvian marching powder.

I was falling in love when I first encountered this song on the tube, and perhaps as a result I thought it was the most beautiful thing I'd ever heard. The whole crass commercialism J.C. Penny connection notwithstanding, of course.

Marc Bolan's critical reassessment pretty much began when this obscure T-Rex b-side started showing up on the tube. And with good reason -- it's an absolutely killer rock 'n' roll track.

2. The Beach Boys' "Wouldn't It Be Nice" as heard over the beginning and end credits in Shampoo 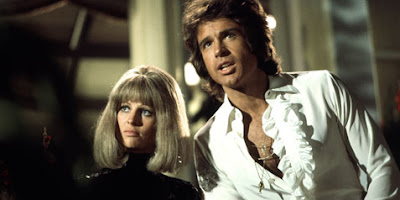 The contrast between the achingly naive innocence of this great Pet Sounds track and the top-to-bottom corruption of Richard Nixon's administration (with Los Angeles standing in as a metaphor for the sickness of America's soul in the worst days of the Vietnam Era) couldn't have have been more pointed. Myriad props to star/producer Warren Beatty for having the nerve to use it like that, of course.

And the Numero Uno most despicable use of a great record in some context where it clearly doesn't belong quite self-evidently is....

A special circle in Hell awaits the Ferengi ad man who came up with the idea to rewrite the great Doc Pomus song to sell boner pills. I actually know the lawyer who licensed the track to the drug company; to her credit, she warned me in advance that the ad was coming. This is the first -- and by far still the worst -- in the series, BTW.

[Shameless Blogwhore: My parallel Cinema Listomania -- themes: Films that should or shouldn't have generated sequels -- is now up over at Box Office. As always, I'd take it as a huge post-birthday present if you could take a moment to go over there and say something snarky. Thanks.]
Posted by steve simels at 3:09 AM

'Lust for Life' by Iggy. No question. Who knew he just loved cruises so much?

Oh, and New Order's 'Age of Consent' in the Target commercial. I mean, what the hell???

Who knew he just loved cruises so much?

Heinous? CSI co-opting "We Won't Get Fooled Again". How the hell can anyone have chutzpah to think they can improve on Keith Moon?

British boy band Take That's "Back For Good" used at the finale of The Office's Christmas episode. Maybe a little obscure, but what was once a swell little pop song became an instant, tear-jerking classic.

"I Got You" by James Brown whenever used in a trailer for some crap comedy, usually starring Judge Reinhold.

"He's single with 3 daughters. She's a cab driver and her meter is ticking."

"The candy-colored clown they call the sandman ..."

(Sal, you got the timing down perfectly for "I Feel Good". Will edit my trailer?

Faze, I think I put one too many "bwanas."

Actually, my first thought was "Lust for Life," too, but I was thinking of the film Trainspotting (which I know steve hates, but it's kind of a brilliant use of the song).

I have been on an Across the Universe kick: Julie Taymor fundamentally redefines "I Want You" (as a song about the draft)/"She's So Heavy" (as a song about American military adventures abroad), such that I know I'll never hear them the same way again.

I'll also put a vote in for Cheap Trick's cover of Big Star's "In the Street" for the theme of That 70's Show, which was really just Happy Days for the millenials. Reportedly, the late Alex Chilton called it "That $70 Show," because that's how much he got every time it played. But the song itself was a nice tribute, and marked the show as many times hipper than the actual 70's right from the get-go.

And who can forget
Mr. Roboto? Dunno if it counts as a new meaning, but it was brilliant in its weirdness.

"My City Was Gone" as the theme song for some bloated idiot.

Haha dude, i live in Paris, if you wanna know some cool places for party, hit me up! :)

Smokestack Lightning was my ringtone until last week, when the Cialis commercial came on and my kids mocked me mercilessly.

Someone is using the piano run from Nina Simone's Preacher Man, but can't remember who.

Pretty much every use of Leonard Cohen's Hallelujah on every TV show from House to the Olympics is suspect, but my favorite use was on some local Christian youth show here in Montgomery Alabama. Guys, just because it mentions the Lord and other Bible personalities does not make it a "Christian" song.

The obvious one to me is "Stuck in the Middle" from Reservior Dogs. Hard to separate that scene from the song ever since.

Then there's any cheap movie needing to establish a charismatic villain has entered the room.

My favorite would have to be the show WEEDS, for its brilliant use of song over opening and closing credits. Worst, though it never fails to crack me up, would be the emo-track-w/slo-mo-visuals in the final minutes of many a show now (e.g., COLD CASE, CRIMINAL MINDS).

Worst, though it never fails to crack me up, would be the emo-track-w/slo-mo-visuals in the final minutes of many a show now (e.g., COLD CASE, CRIMINAL MINDS).

God, I hate those. In particular on Cold Case. I was briefly a big fan of the show because Katharine Morris was such a cutie (before she got all anorexic or whatever), but those sentimental then-amd-now montages with the earnest emo shit finally became too much for me to handle.
:-)

"Trouble" by Cat Stevens from Harold and Maude.

"Knockin' on Heaven's Door" by Dylan from Pat Garrett and Billy the Kid. Slim Pickens' best death scene not involving riding a nuclear bomb to Russia.

I guess these are probably off topic since I think they were first introduced in these films.
But still great pop music/movie moments.

Dwight Yoakum's A Thousand Miles From Nowhere at the end of the wonderful (and apparently very little seen) Red Rock West. I've never heard the song again without remembering it's use in that movie.

I also really liked the use of Stevie Wonders I Believe over the credits in High Fidelity.

I really liked the use of AM 60's breezy "Summertime Girlfriend" in an Old Navy ad a few years back. The first one I ever actually paid attention to.

Ricky Nelson's "Hello Mary Lou" in "The Man Who Fell to Earth". Completely out of left field, but somehow it worked.

The great: the Kinks' "Living on a Thin Line" from the unforgettable Sopranos episode where Ralphie does in his stripper girlfriend.

The odd: Lou Reed's "Perfect Day" (tolerable but not his best work) being used in an AT&T commercial around the Winter Olympics this year.

The crass: the use of classic Who songs for the opening credits to various CSI series. Glad to have them get the air time, and I'm not at all against Townshend etc. making money, but I hate having these great songs associated with such shitty shows.

The knock-me-over-with-a-feather: Richard Thompson with a blistering cover of Donovan's "Season of the Witch" for the delectable Jill Hennessey's now-defunct Crossing Jordan.

Late again to the thread, but I always think of capitalism as a two edged sword. Without commercials, first toys.com and then aol, nobody would have heard Israel Kamakawiwo'ole's transcendant "Over the Rainbow", it never would have been featured in TV shows, the record would not have gone gold and Iz's family would not have the royalties to compensate for his early, not unexpected demise (the guy must've weighed half a ton when he died. Billie Holiday's fans gave her heroin when she was in the hospital, Iz got Twinkies smuggled to him).

True story-- Israel and his brother Skippy played at my high school in Hawaii years ago, and they poached one of my classmates to play steel guitar in their band, the Makaha Sons of Ni'ihau. Go Cowboys!

I totally agree with you about the "Dusty and Sweets McGee" clip. That has been haunting me ever since I saw it.