Screw the START Treaty: The Masses Are Clamoring For More Rogue Nukes!

Believe it or not, this is the very first pop record I ever owned and played on my own little record player. 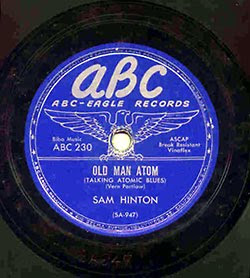 In the interest of full disclosure, I should add that the 78rpm version of this I owned was on Columbia Records, which licensed the original master for national distribution after legendary New York disc jockey Martin Block played the edition pictured above on his influential Make Believe Ballroom program.

Jeebus, sometimes I can't stand the fact that I'm actually old enough to remember all this crap.

In any case, I think this is actually a terrific -- and obviously still relevant -- song, and a heck of a performance. Also, whoever produced the track obviously knew what they were doing; the little hint of reverb that sneaks in on the "Hiroshima, Nagasaki..." choruses is really effective, and that explosion at the end is an especially nice touch; totally creeped me out when I was a kid, in point of fact.

"So listen folks...here is my thesis:
Peace in the world -- or the world in pieces."

Truer words, etc.
Posted by steve simels at 6:54 AM

That was on Make believe ballroom? The same one my sister and I used to scream at our parents to shut off when we were in the car?
I'm so confused! But I'm younger than you

Make Believe Ballroom was on for ten or fifteen years BEFORE this record came out. Block was apparently like the second DJ in radio history.

Interesting. I only knew of the song from the soundtrack to Atomic Cafe. It is by The Sons of the Pioneers there, which is pretty peculiar in and of itself.

But it's no Fujiama Mama;>

I was thinking sort of the same thing, actually.

Arthur Lee picked up that ending for "7 and 7 Is".