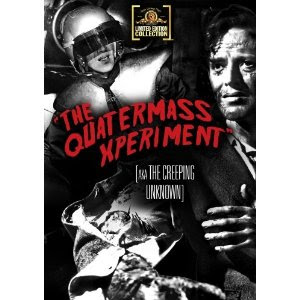 Terrific news from the good folks at the MGM Limited Edition Collection -- a first-rate version of The Quatermass Xperiment (aka The Creeping Unknown in its American incarnation, but either way one of the creepiest and most original sci-fi thrillers of the 50s) is just out and at a quasi-bargain price.

Tautly directed by Hammer Films stalwart Val Guest (who also did The Abominable Snowman and The Day Earth Caught Fire, two equally memorable B-movie genre classics) the 1958 Quatermass stars Brian Donlevy as the titular driven scientist who shoots the first manned rocket into orbit, only to find the crew inexplicably disappeared -- save for one, who's suffering from some degenerative disease nobody can explain -- after the spaceship crashes in the British countryside. And after that...well, I don't want to spoil any of the film's still effective low-budget shudders, although I will say that the original story for the film is by the great Nigel Kneale, who might be described as the Rod Serling of Britain.

Here's the trailer for the American version.

As you may know, the Limited Edition Collection discs -- burned as DVD-R's on a by request basis -- don't feature film restorations per se; instead they're re-mastered from whatever was the most recent video transfer lying around the studio vaults, and are thus rather hit or miss. In the case of The Quatermass Xperiment, the print/transfer is the same one currently being aired on Turner Classic Movies, which is to say by far the best version of the film I've ever seen. In fact, it looks well nigh pristine, with negligible scratches and dirt and absolutely razor sharp black-and-white images.

You can -- and if you're any kind of a sci-fi buff really should -- order the DVD over at Amazon here. You'll thank me, honest.

Incidentally, The Quatermass Xperiment -- like the two film sequels Hammer later unleashed -- was based on a wildly successful Kneale-penned BBC-TV live mini-series. Alas, the kinescope for the first of them has not survived, but the other two have. Even better, you can watch (or download) both, in very high quality print/transfers, totally for free over at the invaluable Internet Archive.

Quatermass II, aka Enemy from Space, can be found right here.

Check out the remarkably Lovecraftian Quatermass and the Pit, aka 20 Million Miles to Earth, here.

I should also add that these TV versions, for a variety of reasons, are actually even more atmospheric and creepy than the films. Which is really saying something.
Posted by steve simels at 12:13 AM

The BBC version of Quatermass and the Pit is totally cooler than the movie. And I love the movie.