An Early "Teach Your Grandchildren"-ish Clue to the New Direction

So grizzled old DFH's Graham Nash and David Crosby showed up at Zuccotti Park last Tuesday to show solidarity with the OWS protesters, and our pal Watertiger, of Dependable Renegade renown, caught this image via her cell-phone camera. 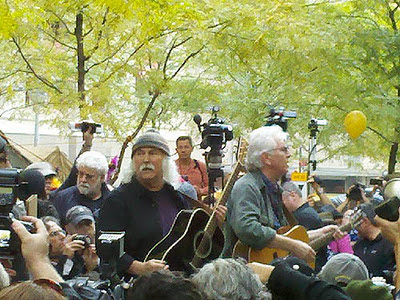 Actually, if you were watching Keith Olbermann on Current TV Tuesday night, he had video footage of this where you could clearly glimpse El Tigre in front of the stage taking the photo; unfortunately, that part of the segment isn't included in the clip on the Current website, so I couldn't grab a screen cap of her getting the shot, meta as that would have been.

In any case, a coveted PowerPop No-Prize will be awarded to the first reader who gleans the theme of tomorrow's Weekend Listomania from the above.
Posted by steve simels at 12:27 AM

I don't know... songs old hix play while hot chix take their pix... WHATEVER! Will someone just get to Sal at Burning Wood and talk some sense into him?!?

Most desperate and/or hopeless try to once again become relevant?

Most annoying dipshits who can't sing anymore and never could write a decent song?

Most grating, precious, self-congratulatory dingleberries running to the head of the parade and declaring themselves the leaders?

Protest songs about how the protest isn't sure what the protest actually wants to address?

To be honest, I don't quite understand the level of hate jones for these guys.

I mean, seriously -- behold the perils of being insufficiently cynical for some people.
:-)

But kidding aside, no, no, no and no.
At least not quite.

Marsupial, I tried asking Sal what was going on. He seemed pretty adamant about giving up the site and packing it in this time. Quite a shame really. Maybe he'll change his mind in time to come, let's hope.

Still boring after all these years?

Best moments with Stills and Young?

Music to Eat The Rich by?

Is there anyone under 50 here?

Steve, your love for the Hollies is clear, but IMHO Graham Nash deserves a special place in Hell for the insipid dreck of Teach Your Children and Our House...

Songs by part (2 or more) of a larger group?

Old Guys Trying to Stay in the Moment?

Trying to stay relevant when there is no chance in Hell they ever will be again?

Sure are a lot of haters showing up today. In light of what C&N were trying to do, that's kind of interesting.

i'm more curious why george lucas is hovering in the background - may the force be with them.

i'll guess rich guys with guitars that are probably worth more than most of the crowd make in a month or 3.

Seriously, are people here actually resentful of musicians who make money because they sell albums and concert tickets? Would you prefer that they stay at home and keep their mouths shut? They came down to the park and played for free. What more do you want from these guys?

Tell me when Gaga shows up.

Yes, David Crosby gives me hives. Here's something I wrote in my blog if anyone wants to know more. BTW, Robin Hitchcock hates him, too.

###########
This particular rant has been sitting in my rant box for years and years, mostly because slagging David Crosby seems so much like shooting fish in a barrel. He is, after all, the archetypal self-indulgent, bloviating, undertalented rock star, to all intents and purposes the poster boy for a certain kind of apocalyptic left-wing California pomposity. Nobody needs to hear me add my voice to a chorus that grows louder and more indignant every time he opens his mouth, which he's been doing since middle '60s, through the Byrds, Crosby Stills and Nash and whatever else.

The Wikipedia page for the Byrds has evidently been edited by one of his partisans, or by Crosby himself, to include the anecdote he tells in TV interviews, about his being fired from the Byrds in 1967. "They said they could do better without me," he says with a wry face and a sardonic shake of his head. After all, he went on to Crosby, Stills, and Nash and made all kinds of money, right?

Well, ya know what, Dave? (May I call you Dave?) They did do better. The Byrds got rid of a (granted) very good harmony singer who was also the most pretentious, self-congratulatory songwriter of that pretentious, self-congratulatory era and they got Clarence White, a brilliantly innovative guitarist, who with Roger McGuinn crafted a two-guitar interplay that people use to make great records to this day. In the meantime, who in folk, rock, or country tries to sound like CS&N? Nobody, that's who, because the records Crosby, Stills, and Nash were making when McGuinn and White were reinventing the guitar band are today embarrassingly dated.

They did do better without you, Dave, a lot better. They became one of the most influential groups of all time while you became a nostalgia act. So, to summarize: David Crosby is a horse's ass.

Actually, Fleet Foxes are the kind of younger band that makes you really really miss CSN.

And I'm sorry, Pete -- Crosby's contributions to the Byrds are too numerous and too brilliant for the kind of dismissal you just made.

Sure, he's a bit of an asshole. And Mike Love is a dick.

That doesn't change the fact that Crosby wrote "Lady Friend" or that Love co-wrote "Warmth of the Sun."

While Clarence White plays on "Sweetheart Of The Rodeo", and later contributed to the twin guitar attack, David Crosby's immediate replacement was Gram Parsons. And while Gram was plenty problematic, his legacy in and out of the Byrds, however short, makes David's look fairly insignificant.

Musicians who look a lot better than you would expect, all things considered?

Sorry for the vitriol, but I saw those two on Letterman the night before and they were, "Lady Friend" notwithstanding, terrible.

And my nephew the voice major at Northwestern loves the Fleet Foxes.

I didn't even know the NYPD *had* a psyops unit.