Review: Vegas with Randolph, Above the Blue 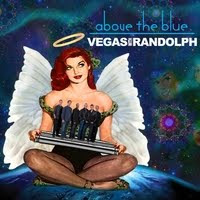 As the weather cools and I realize that holy-crap-fall-is-over-and-I-haven't-accomplished-a-thing, I'm looking back on what I've been listening to over the fall and see that, overwhelmingly, it's centered on 2 CDs: the breathtaking Sky Full of Holes, and Vegas with Randloph's Above the Blue.

I've obsessed about VWR here before, and all the songs mentioned here are indeed on the CD, which was released at the end of the summer.

But Above the Blue is a lot more than that: the title itself references a conscious decision to turn away from the traditional melancholy of power pop (see: Shoes, no The), and the title track is a soaring anthem, or as much of an anthem as power pop can have:

The CD is, somewhat ironically, set up like an old-school vinyl album, with a clear side 1 and side 2. Side one consists of, say, the first ten songs: "The Better Part;" "Above the Blue" (above); "Some Time to Live;" the catchy commuter love song "Supergirl;" a duet with Liverpool songstress Maxi Dunn, "The Lesser Fool;" "She Does it for Me" (the only one of these without a YouTube accompaniment; more on that below); "Summertime," which makes me want to drive around in a convertible in a beach town (something, I hasten to add, I have never done, but I imagine it feels just like this song); the totally understandable chronicle of obsession, "Marisa" (that's Marisa Tomei, for those of you playing along at home); the seasonally-appropriate, take-the-guesswork-out-of-it "Lagavulin for Christmas" (below); and the ethereal, beautiful "Tree Song," which reminds me uncannily of "India Song," and if someone could explain why, I'd be grateful. (Title? Feel? Unusual instrumentation (orchestrated by Win Oudijk)? All of the above?)

If we define the parameters of power pop as being, roughly, Big Star on one end and the Ramones on the other (and I'd claim both of them, though there's obviously a ton of debate to have on the relative positioning) then VWR really runs the gamut, with "Tree Song" on one end and "Some Time to Live" on the other. But they're not just adhering to the formula, there are some genuinely clever lyrical moves in some of these songs--the kind of "minutiae of life" Gummo mentioned last time we talked about this band--and some terrific, understated stylistic flourishes as well. (For example, you know that moment in Fountains of Wayne's "Mexican Wine," at the end of the first verse, where Chris Collingwood says, almost under his breath, "Yep"? Well, in VWR's "Supergirl," there's a similar moment when, blown away by the hot girl in the next car, left behind at a stoplight, John Ratts whispers a single, awed "Damn." I love that kind of thing.)

What I take to be side two of the CD aspires to an almost operatic scope, in the mode of--okay, I'll go there--side two of Abbey Road. They call it "Double Play," the six songs vary in length from :30 ("Alone") to 3:09 ("Even Though"), and all together tell the story of a far-from-perfect relationship and its aftermath. (One particularly vivid moment occurs in "End of the Party," where the obviously ambivalent, but stoically-trying-to-talk-himself-into-it protagonist, says "you've got something I can't deny/ you get the quarter in the cup every single time." I've been at that party; have you?) It's kind of unusual in power pop, unless you're say, Guided by Voices, in which case you just let the fragments fly. This is a little more cohesive than GBV tends to be. And though "Double Play" is not completely successful, it's ambitious and interesting, and worth a bunch of listenings.

I saw and met VWR at the beginning of this month, when they played IPO in New York. They were really tight, pulling off harmonies completely without monitors and playing a taut, intense set. Live, Brock Harris's guitar rips even more than it does on the recordings, and his liberal use of the pick-slide touches my geeky little heart. Nice guys, too.

A completely nuts-and-bolts observation: VWR seems to have really mastered the idea of using the tools of the web for marketing purposes. Note that pretty much all of the songs on Above the Blue have YouTube videos: that's what you need now, to make sure that people can link you easily. In addition, VWR have come up with an online press kit: the same set of interviews that used to be sent out with record albums in a three- or four-page flyer. Pretty nifty. Are these common? I've only seen a couple of them.

And to inaugurate the holiday season, I'll close by mentioning VWR's Christmas song, "Lagavulin for Christmas," which answers the perennial conundrum with the simplest answer possible: single-malt Scotch.


In short, Above the Blue is highly recommended. Enjoy it with your Langavulin!
Posted by NYMary at 7:22 AM

A song about Marisa Tomei?

I will go listen ASAP, and if it's even half as good as I hope, these guys are my new favorite band.

"...and the ethereal, beautiful "Tree Song," which reminds me uncannily of "India Song," and if someone could explain why, I'd be grateful."

I think the similarity between both songs is due to three things (well, maybe two-and-a-half):

1) the combination of acoustic guitar and Mellotron

(I'm pretty sure that the Mellotron is in "flute" mode, as it was in "Strawberry Fields Forever" – and, it seems, every single time it's used in a modern rock song. It's what people think of as the "Mellotron sound". Apparently, musicians nowadays are unaware that the Mellotron has more than one sound setting.)

(I'm not entirely sure about number 3, because I've only heard the songs a couple of times.)

That Christmas song is absolutely wonderful. And I think you're right about the Big Star/Ramones continuum as far as VWR is concerned.

Guess I'll have to get the album...