Hey, If I Want to See an Instro Band, I'll Buy Tickets for the Raybeats or the Budapest String Quartet

So this weekend, a certain Shady Dame and I were privileged to attend a show -- at New York University's exemplary new auditorium at the Skirball Center for the Performing Arts -- by the legendary Teletubbies. In front of the newly back in action Joshua Light Show.

I must say, the band looked good for their age. 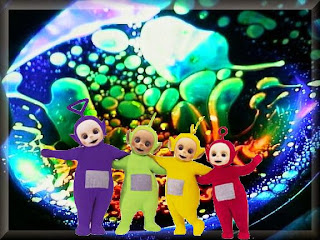 Okay, actually, we went to see the legendary Television at said venue with the JLS, and since I really hadn't ever seen the band at their peak, I was pretty stoked. Which lasted for about five minutes after the show started; beyond that, not so much.

The reason: Television did not perform a single song from any of their three original studio albums. In fact they did no "songs" per se whatsoever -- the show was completely instrumental-jams-only (I think I recognized one number from Verlaine's early 90s instrumental set Warm and Cool, but I'm not sure).

What was it like? Well, some of the playing was brilliant (no surprise there), and I respect them for trying something a little different. And if the idea was to recreate the experience of hearing a second-tier San Francisco ballroom psychedelic band at one of the Fillmores in 1967 (sans the pungent aroma of marijuana, of course) then the show was a complete success. Unfortunately, I've got old Moby Grape live bootlegs from that period whose free-form, made up on the spot, instrumentals sound pretty much the same as Television did last Saturday night. And the Grape's jams are just as enervating without drugs.

I for one, however found the whole experience somewhere between intensely headache inducing and a really unethical bait and switch.

UPDATE: A certain Shady Dame reminds me that Television opened the show with a little bit of noodling on the riff of "1880 or So" (from the third studio album); I regret the error. Also, in the interests of total accuracy, I should add that they DID encore with "Little Johnny Jewel," albeit without vocals, but technically that song was a single rather than an album track.

Seeing no mics on the stage was my "uh-oh" moment --- they're great musicians, but the show was ultimately boring. It's not good when you're at a concert and you keep looking at your watch and don't care whether or not there's an encore.

And the JLS itself never was and still isn't mesmerizing unless you're on drugs. Strong drugs.

I stopped paying attention to Tom Verlaine back around 1990 or so.

Thanks for confirming my decision.

A little "Johnny Jewel" goes a long way, too.

Sorry the show didn't work out. I know how much you were looking forward to it. You never were much of a Jam Band fan.

The Fillmore East is my favorite rock room of all-time but I was always "iffy to bored" by the Joshua Light Shows there. I was there to see the musical acts not be visually distracted by the light show.

Where did you find The Teletubbies photo? It's a hoot!!!

A certain Shady Dame photoshopped it.
:-)

Now if only The Who would do this for their upcoming 50th Anniversary Tour, I'd be impressed. ;-)