Annals of Devolution (An Occasional Series)

So the other day my fellow toiler in geriatric garage band The Weasels constant reader and friend of PowerPop Jai "Guru" Dave e-mailed me the following query:

"Steve -- have you ever heard the German Bonds?"

Now, my immediate reaction was "Why is Dave quoting a line from a famous scene in The Producers?" But as it turns out, he wasn't. Seems he had been watching that Pretty Things clip I posted the other day, and over at YouTube there was a link to another clip -- from German TV -- which was a live 1966 performance by a Kraut group called, you guessed it , The German Bonds.

Whom neither Dave nor I had ever previously heard of, but whom we both agreed -- at least on the basis of the aforementioned clip -- were pretty awesome in that mid-60s Nuggets/garage band sort of way.

In fact, they were actually quite a bit better than most bands of that ilk -- with very strong musicianship (particularly the organ guy) and above average performance and songwriting chops (although the trousers the bass player are wearing in the video are shall we say ill-advised). Anyway, one could only assume that the reason the GBs never became even a minor footnote to rock history is because (like so many of their contemporaries) their records weren't as good as their live performances.

I was curious about what happened to them, however, and after a little Google research, I learned that in 1970 -- with the addition of an expatriate Brit -- the band reinvented itself as Lucifer's Friend -- 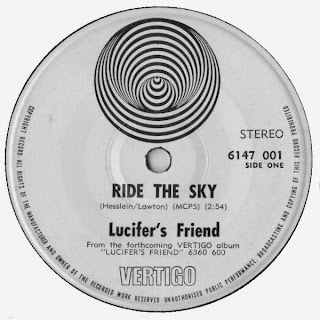 -- who were precisely the sort of doomy/prog-metal annoyances -- think Uriah Heep without the warmth -- who essentially ruined the early and mid-70s for me.

Thus proving that Devo was right, of course.

Oh well, at least they eventually achieved some small-scale commercial success both on the Continent and (occasionally) here in the States. In fact, with most of the original members on board, they're still at it. I hope Satan appreciates the effort.
Posted by steve simels at 8:33 AM

Spot on! Loved the German Bonds clip. How the mighty fell!

"Uriah Heep without the warmth".

There was a guy in college who's favorite band on the planet was Uriah Heep. How does this happen?
A few years later, all he listened to was Keith Jarrett solo piano improvisations.

The only heartening thing in this story is that they didn't wind up back working in the factory. Apparently, they managed to be musicians for their whole lives! Not a bad outcome, if you think about it.

Plus the guitarist managed to snag a vintage Les Paul goldtop.
:-)

Cameron Crowe's review of the Lucifer's Friend lp (which I have on mint vinyl - not sure how I ever acquired it!):
http://www.theuncool.com/journalism/review-lucifers-friend-self-titled/

Apparently the prog leanings of the Bonds began long before they mutated into Lucifer's Friend:

You gotta love the guitarists' choreography to Mozart.

With regard to your comparing Lucifer's Friend to Uriah Heep, the former's lead vocalist John Lawton ended up doing a spell in Heep of Shit. For special turd lickin' tastes, indeed.

Gotta admit I kinda like one Heep song though - Poet's Justice. Used to dance to it.

Had to sit through Heep live a couple of times. Once opening for Three Dog Night (with Osibisa) and another opening for Deep Purple (with Buddy Miles). Was backstage for those shows too. Certain members of Uriah Heep were huge druggies during that time (1971-1972) which wasn't really surprising. Let's just say that neither performance made me want to run out and buy their albums.

Vickie Rock - What? No Grammy Wrap Up?

And I know the band !!! (pronounced Chk Chk Chk) exists, but I always hoped that one day, !!! would discover that another (perhaps, British) band already had the three-exclamation-point name, and had to legally change its name to !!! U.S. Or maybe !!!!

It should be noted that "Lucifer's Friend" is horribly tepid name, and they probably deserve their relative obscurity for such a "lukewarm water" offering. "Satan's Buddy"--the metal gods do NOT approve!