Your Tuesday Moment of Words Fail Me

From her 1964 album Introducing Mandy -- and the Golden Age of British Hookers 'n' Blow -- please enjoy the irrepressible B-girl who helped bring down a government, Mandy Rice-Davies... 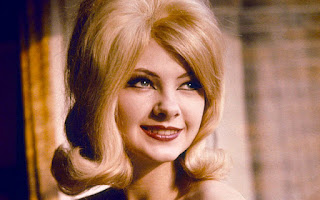 ...and her definitive cover of the Allen Toussaint classic "You Got What It Takes."

I have to confess that back in the day, I was sort of obsessed with the fabulous British sex scandal Davies and Christine Keeler participated in, to the extent that I seriously wanted to name the family cat Profumo (fortunately, my parents nixed that one).

In any case, Rice-Davies went on to have interesting second and third acts; she married a rich Israeli, converted to Judaism, moved to Israel and opened a string of restaurants and clubs in Tel Aviv. Later, she wrote a memoir and a novel, and appeared in several movies (including David Bowie's Absolute Beginners) and TV shows (a cameo as herself on Absolutely Fabulous.)

Shortly before her death (in 2014), she described her post-scandal career as "one slow descent into respectability."

UPDATE: "You Got What It Takes" was NOT written by Allen Toussaint. The song's provenance is unclear, but it was probably penned by Marv Johnson, who had the hit record version.

I regret the error.
Posted by steve simels at 8:46 AM

Steve: I thought this song was originally a hit for Marv Johnson. Berry Gordy claims to have written the song, but others say it was Bobby Parker from whose "Watch Your Step" John Lennon stole the opening riff to "I Feel Fine."

Mark: The Keeler deal was "Hey Nineteen" with a lot of overblown international intrigue. The allure of young pussy brought down the MacMillan government. I remember my dad reading the paper and talking of his lustful desire for Keeler to my mom. They shared stuff like that and put it to good use.

BTW, in the late summer of 1964, my mom and I were doing some serious back-to-school shopping out towards L.A. I convinced her take me to Lewin's and buy me the Stones "Five By Five" EP that was getting played on KMEN back then. I saw Mandy Rice-Davies' EP there. How could that be any good, I thought. I guess it's better than Richard Chamberlain. Speaking of which, anyone ever see the Teen Screen feature about Chamberlain with the title "Everybody Loves Dick." What were they thinking? It has lots of really gay looking shots of him lounging by the pool in his swim trunks.