Tales From the Mystic East (An Occasional Series): Special There's a Fungus Among Us Edition

And may I just say and for the record that the la-la song heard at the opening of this trailer is the single greatest creative accomplishment of mankind to date?

I think I posted that clip last year, but it behooves repeating, as the movie itself -- Matango -- is essentially Gilligan's Island with killer mushrooms, which you have to admit is one hell of a premise for a monster movie. It's actually a pretty effective little film; the whole thing's up on You Tube if you want to check it out. 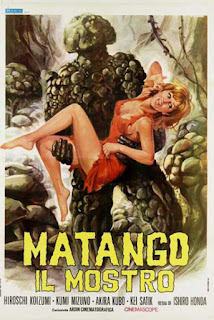 Meanwhile, and by way of apology, here's a somewhat more rocking piece of work with a relevant theme. 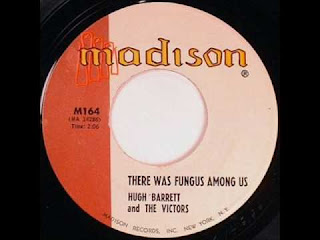 Since I will now have the "fungus among us" chorus in my head for at least a day/a month/forever, I'd like to r̶e̶t̶a̶l̶i̶a̶t̶e̶ return the favor with this amazing pop ver of Mothra's Theme...

Good thing it's a local call.

RE: Fungus Among Us is the hit, but not the original version. Love Bobby Angel's sax. And the chicks call and response bit. Apparently a huge hit in the midwest thanks to Dick Biondi on WLS.

RE Matango: Sadao Bekku is the god of atmosphere.

I would definitely swap sushi with Kumi Mizuno. A good California roll always hits the spot:-(

I always found a big mushroom headed man to be a welcome threat. They should have had a few more of those on Gilligan's Island. Don't think the professor was quite enough for Ginger and Mary Ann.

I hate you all for doing this to me! I was having such a good week.

Since no one took my tee-up, here's the original from 1958 by Terry Noland. It's a little more professional, but not necessarily more enjoyable.

Thanks for cueing up my weekend a day early, Steve. We've been poolside since noon, goofing and dancing to songs like this while drinking Martinis. It's good for your body. It's good for your soul. It's the Golden Age of Rock 'N' Roll. The Ace Records comps, that is .... mixed in with some totally Rockin' Bones. Kudos to you for breaking out the awesome sauce.

Capt. Al: Just go with it as if you got dosed. You can't fight it. So you might as well enjoy the ride.