From 1973, and Britain's Old Grey Whistle Test, please enjoy the incomparable Brinsley Schwarz, totally live, in a fabulous performance of one of Nick Lowe's early signature tunes, the infectious and poignant "Surrender to the Rhythm." 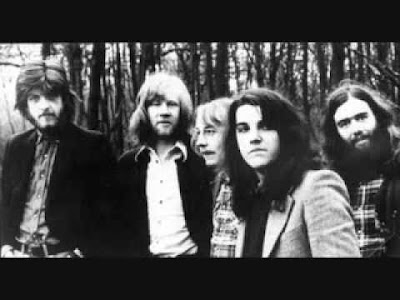 I first posted about that clip in 2007, back when both this blog and YouTube were young; at the time it was a major revelation for me, since I had never had a chance to see the Brinsleys in person (their only American performance, which I missed, was a legendarily disastrous gig at the Fillmore East that almost destroyed their career). In any case, as I said at the time, I think we can all now agree that the presence of this clip on YouTube is conclusive proof that YouTube is the most important thing that's ever happened in the entire history of humanity.

Incidentally, there's a lovely story about Bob Andrews, the Brinsley's organist (seen here grinning insanely and covering himself in glory with some of the most lyrical keyboard work imaginable). Seems he was a huge fan of The Band's Garth Hudson and was constantly updating his gear in emulation of the Great Man Himself; if there was an effects pedal or amp Hudson used, Andrews would immediately add it to his arsenal, trying to get that elusive Hudson sound. Only problem was, no matter what he did he couldn't quite achieve total Garth-ness and it drove him nuts.

Anyway, sometime in the early 70s The Band toured the UK and at one point wound up rehearsing at the Brinsley's studio and using their equipment. Garth turned everything on, put fingers to the keys, and immediately sounded just like himself.

Andrews, who was lurking in a corner too awed to say hello to his idol, literally wept.
Posted by steve simels at 9:51 AM

Great story about Bob Andrews. And a great band too.

This song and all the rest on "Nervous On The Road" were when I fell for Nick Lowe, and it was yet another 33¢ bargain bin score...the album was barely a year old. I found all the rest in used/bargain bins, too, and loved 'em all. And as far as Nick's post-Brinsleys career, I loved all of the Rockpile stuff (Rockpile/Nick solo/Dave solo/Carlene Carter with them backing her), and liked/loved everything up until the mellower "Impossible Bird" years. The comments on the "All Men Are Liars" post the other day baffled me...largely Nick-negative. I mean, have you HEARD "The Rose Of England"? What a gorgeous song! And "Party Of One" (from whence sprang "All Men") was a thorough return to form.

This is shaping up to be a very good week at Powerpop Blog.

By the way there are some really great Brinkley Schwarz rarities available at:

I bought the recently released live lp (1st item on the news list on the link provided by Capt. Al) Good stuff.

I just asked Bob Andrews if the story is true.

Rapturous! [once Whispering Bob's out of the way]. Jammed-Up-Tight with luscious looseness for maximum wonderment. They got it all goin' on with that well oiled machine. Only thing you can do is grab it and take it to bed and surrender to the rhythm.

Wonder what kind of gum Nick's chewing and how much flavor's left? How would this sound with Van Morrison on vox? Garth would be a bit too complex and eccentric to play with this band. So Bob needn't worry, even if Garth is the ultimate Merlin.

Knew a guy who worked for UA in SoCal throughout the 1970's. Used to see me dance at clubs often. Nice guy, even if his favorite drink was a Harvey Wallbanger. He got me all my stuff free with press kits, perks and what not, including the two BS USA releases.

UA really had a great and diverse group of artists back then. Met a few of them and had some fun times. Lonnie Jordan wanted it bad, but he never got any, no matter how much I liked Slippin' Into Darkness. Me and Sandy did a parody song about it titled "Don't It Make My Black Balls Blue." Incidentally, the Crystal Gayle tune it was based on was also on UA.

Wonderful story about Bob! And who knew that human touch makes such a difference on organ.