They're Gonna Put Me in the Movies....

...specifically in the 30th anniversary performance montage film The Smithereens are showing on-stage on their current tour. 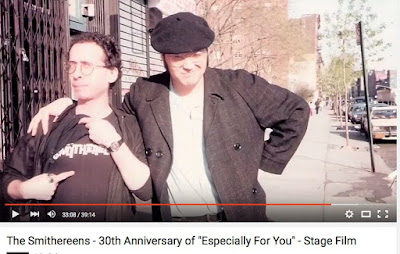 That's me sometime in the 80s with drummer Dennis Diken, When I saw the 'Reens at B.B. King's earlier this year, the guys were kind enough to give me a shout-out advising me of my cameo; unfortunately, the people I was sitting with all blinked at the same time and thus missed seeing it.

Ah, the price of fame.

In any event, I vaguely recall posing for that photo -- and I wore that Smithereens t-shirt for ages -- but for the life of me, I don't know where specifically it was shot. Somewhere in the Village, I suspect.

Here's the whole film -- my on-camera moment is at exactly the 33:09 moment, right after a shot of Radio City Music Hall.

I have forgotten what a consistently excellent album this was. Thanks for reminding me.