Your Saturday Moment of Zen

A. Whitney Brown, on SNL sometime in the early 80s: 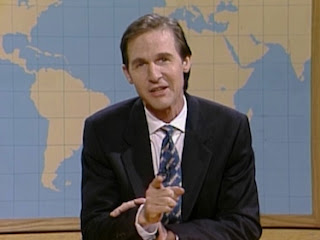 "And what is the American Dream?...Maybe I can best express the American Dream in a story. It's about a kid who grew up in Tupelo, Mississippi in the 1950s. He was a poor kid, but he had a rockin' guitar, a wiggle in his hips, and some flashy clothes -- and he had that certain thing called 'talent.' Of course, he never made a nickel
because he was black, but two years later Elvis Presley made a fortune doing the same thing."

Sometimes I really miss AWB -- in many ways, he was the Stephen Colbert of his day.

Saw him do standup in Pittsburgh once right after he ceased being on SNL. Got to sit next to him at the bar and tell him how good those pieces are and how well-written they were. Apparently he mainly wrote his own stuff, and he seemed quite touched by my compliment, as I had previously identified myself as a journalist.

Yeah, like Colbert he is smug, preachy and unlikable. But it sells.

Yeah. That must be the secret of Colbert's success.

saturday night live should make fun of that smug chris matthews.i keep reading colbert's character is based on o'reilly but i don't see it

Chessman: Daryl Hammond has for years done impressions of Chris Matthews on SNL, and probably in his standup act as well. Also, in regard to Colbert, "based on" is not the same thing as "slavishly replicating." Nevertheless, Colbert's "The Word" segment was a straight rip-parody of O'Reilly's "Talking Points" segment.