Q: Nick Lowe's "What's So Funny 'Bout Peace Love and Understanding?" has become the de facto 21st century equivalent of "We Shall Overcome" or any of the Civil Rights/Anti-war anthems of the 60s. 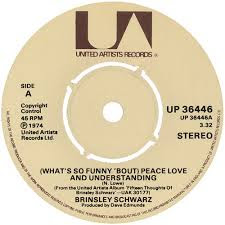 On the basis of this 1974 video clip, did Lowe write it essentially tongue in cheek? And does the fact he received a million dollar royalty check for the song (for its appearance on the soundtrack LP of The Bodyguard) thus make him the luckiest cynical bastard on the planet?

Discuss.
Posted by steve simels at 9:13 AM

Taking this song seriously is a thing?! I guess I need to get out more...

I've always seen this song as fairly tongue-in-cheek. But I'm rather a cynical bastard too.

Did you take Costello's version as him being ironic?

Loving this week, Steve. I had totally forgotten how great these guys were -- they were hiding in plain sight.

This Brinsley version is the best version of the song I've ever heard. When the boys hit "harmony" in the song, it's poifect. And I've always taken the song's lyrics to be tongue in cheek. Now must search for the DON'T EVER CHANGE album.

Hmmm. I guess I'll just be silly, but:


I've always thought that the song is tongue-in-cheek, AND heartfelt and serious.

Any young man penning those lyrics anytime would rightfully expect a heaping spoonful of shit from all quarters. The natural defense would be to disclaim it by poking one's cheek out about as far as it would go. Considering all of the lip service paid to love and harmony in the years running up to that recording, it also served to skewer "peace and love, peace and love" types with their groovys and their peace signs. You know, like Ringo.

But a quick study of the lyrics reveals no snark, no put-on, just . . . sincerity.

hide one with another.

You grading on a curve?

I don't know if Lowe'd get on board, but Trump keeps saying he's gonna make AMERICA great again. Both bands started at about the same time. Maybe Trump can make SCHWARZ great again, too!

I always took the song as a genuine question.

The Holmes Brothers do a wonderful version too.

One pair of matching bookends. Different as night and day.

Taken on Nick's collective song catalog, he has always had one of the better sense's of humor on the planet. So I tough to take anything too seriously. That, plus this song came at the end of the Vietnam protest era. Kind of a closure to the '60's protest era me thinks.

Back in the late '70's, after being properly brought up to speed on the whole British Pub scene music (thank you Stereo Review, tough to get good music info in Nebraska), I had to scour lots of used record bins to fill out my Brinsley Schwarz, Duck's Deluxe, etc record collection. Their US double LP was an easy cut-out find. rest were tough. amazing how much now is back on You tube.

Need to add - Like the lumberjack look of the band better than the preppie Frat Rat look........

I think the song intends to be read both ways at the same time.

Nick has stated many times the lyrics were tongue-in-cheek. The Costello cover (which made its first appearance as the B-side of Nick's "American Squirm" single and billed not as Costello, but as "Nick Lowe And His Sound") is more ambiguous due to him and the Attractions playing it as the set-closer it later became for him. But Costello has played it in ways that completely obscure the snarky origins, particularly when he played it as the closer to the Dave Letterman show he hosted just days before Bush Jr. ordered troops into Iraq. Just so his meaning wasn't lost, he bade the audience farewell with the words "May peace prevail" as he strummed the opening chords.