Okay, the events of the last three or four days have pretty much tuckered me out.

First of all, Propaganda Barbie White House spokes-liar Kellyanne Conway -- who coined the now immortal phrase "alternative facts" on Sunday -- apparently got her inaugural outfit from the only heterosexual designer in America. 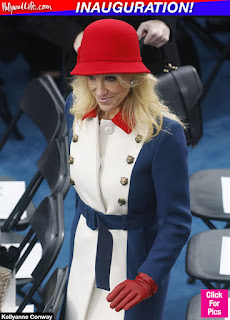 I mean seriously -- she looks like the lead singer of a Paul Revere and the Raiders tribute band.

Secondly, long-time readers may recall I had a bug up my ass for several years over Kelefa Sanneh, the then scribe for the New York Times who I dubbed "The World's Most Irksome Rock Critic" for his fealty to the "Everything's Great Including the Obvious Shit" school of pop music journalism. In any case, Sanneh abandoned rock criticism for a more lucrative gig at the New Yorker as a political pundit of sorts, and I figured good riddance to bad rubbish (at least at the New Yorker, he's a mediocrity surrounded by people far more talented than he, and I could thus safely ignore his inanities).

Until this month, however, when he published this appalling apologia for an anonymous pro-Trump blogger. And thus was able to weasel-word an on-the-one-hand-but-on-the-other-hand endorsement for Trumpsputin and all his evil works.

To which I can only add -- fuck you, Kelefa Sanneh. Where you breathe.

Regular less partisan and despairing music postings resume on the morrow.
Posted by steve simels at 9:12 AM

Kellyanne's outfit could have been worse; she could have tried to emulate The Young Rascals.

I am surprised pee-Rump let her go out dressed as such. She looks like she's on crack.

And what was up with pee-Rump's tie hanging down to his pecker? Weird that.

His ties always hang down like that. He thinks it makes him look thinner. Have you seen the shot where it's held in place with Scotch tape?

And I want someone to tell me what animal heads those buttons are.

Gucci coat.
The description says Feline heads.
Close up appears to be a growling Tigers head.